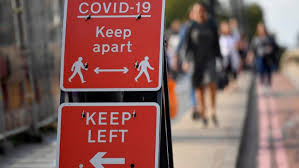 Prime Minister Boris Johnson is expected to order England back into a national lockdown as the United Kingdom passed the grim milestone of one million COVID-19 cases and scientists warned the virus was spreading faster than their worst predictions.The United Kingdom, which has the biggest official death toll in Europe from COVID-19, is grappling with more than 20,000 new coronavirus cases a day and scientists have warned the “worst case” scenario of 80,000 dead could be exceeded.As Johnson prepared for a hastily arranged news conference in Downing Street after news of the lockdown leaked to local media, the government said total confirmed COVID-19 cases had risen 21,915 in the past day to 1,011,660.Johnson held a cabinet meeting on Saturday after government scientists warned the outbreak was going in the wrong direction and that action was needed to halt the spread of the virus if families were to have any hope of gathering at Christmas.The Times newspaper said Johnson might announce that only essential shops, nurseries, schools and universities will remain open in a month-long lockdown. Johnson’s office declined to comment.Scotland, Wales and Northern Ireland run their own pandemic policies.Johnson was criticised by political opponents for moving too slowly into the first national lockdown, which stretched from March 23 to July 4. He fell ill with COVID in late March and was hospitalised in early April.EUROPE LOCKED DOWNThe measures bring England into alignment with France and Germany by imposing nationwide restrictions almost as severe as the ones that drove the global economy earlier this year into its deepest recession in generations.A national lockdown would represent a dramatic change of policy for the prime minister, who has been saying for months that it will not be necessary.Two weeks ago he defended his strategy of a patchwork of local restrictions by saying he wanted to avoid the “misery of a national lockdown”. Currently, areas of England are subject to one of three tiers of coronavirus restrictions.Calum Semple, professor of outbreak medicine at the University of Liverpool and member of the government’s Scientific Advisory Group for Emergencies (SAGE), said the second wave of COVID-19 was a reality.“And, unlike the first wave, where we had a national lockdown which protected huge swathes of society, this outbreak is now running riot across all age groups,” he told the BBC.A new lockdown would heap more pressure on finance minister Rishi Sunak and the Bank of England to increase their already huge support for the UK economy, the world’s sixth-biggest. The economy slumped a record 20% in the spring and has been struggling to maintain its recovery.So far the United Kingdom has reported 46,555 COVID-19 deaths – defined as those dying within 28 days of a positive test. A broader measure of those with COVID-19 on their death certificates puts the toll at 58,925.