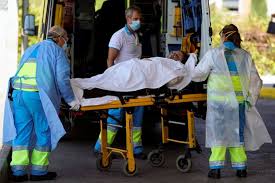 Spain close to half a million coronavirus cases – Reuters

Spain came close to clocking half a million coronavirus cases on Friday after authorities registered 4,503 new infections, bringing the total to 498,989 – the most in Western Europe. A new wave of contagion has been less deadly than early in the pandemic, however, and infections appear to have slowed from a daily peak of more than 10,000 a week ago. The tally could be revised, as Spain updates its statistics retroactively. The death rate remains well below the March-April peak when fatalities routinely exceeded 800 per day. The Health Ministry reported 19 deaths on Friday, bringing the total up to 29,148.With schools due to restart next week and many adults returning to work, the latest surge in coronavirus cases has sparked concern and some confusion. “In Madrid everybody wears a face mask, we maintain social distance, there are no night clubs, so I don’t know what the problem is,” teacher Maribel Cimas told Reuters from behind a zebra-patterned mask .“What are we doing worse than the rest of Europe? ”The Madrid region, which accounts for just below a third of the 101,962 cases diagnosed in the past two weeks, announced it would impose tighter restrictions from Monday, extending a national 10-person limit on public gatherings to cover private parties as well. “The situation is stable and controlled, but that doesn’t mean we’re not concerned,” regional health chief Enrique Ruiz Escudero told a news conference. At a national level, Health Minister Salvador Illa urged Spaniards to respect rules to curb transmission and announced Spain would launch a nationwide antibody study in autumn to determine the prevalence of the virus among the population. A previous study that concluded in July showed around 5% of Spaniards had been exposed to the virus, and, despite the recent peaks, total confirmed cases are still not far off that mark.