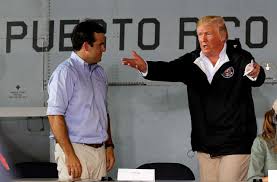 WASHINGTON/SAN FRANCISCO (Reuters) – Puerto Rico, still reeling from Hurricane Maria, is asking the Trump administration and U.S. lawmakers for help in staving off a Medicaid crisis that has put a quarter of the island’s residents at risk of losing medical care.

The territory, which has grappled for years with shortfalls in funding of its Medicaid healthcare program, is on track to run out of money to pay doctors and hospitals by early next year, leaving as many as 900,000 low-income Puerto Ricans without care.

Puerto Rico Governor Ricardo Rossello has asked Washington to waive the territory’s share of Medicaid costs – a step that could cost hundreds of millions. Last week, Rossello returned with another request: an infusion of $1.6 billion per year for at least five years.

A dozen Democratic senators have raised the issue with the Trump administration. Republican Senator Marco Rubio has also expressed support, saying the Medicaid woes could hasten an exodus from the island, though he has not yet taken a position on specific proposals.

“If you take the storm and you add already all the inconveniences, obstructions that it’s created – and combine that with a Medicaid collapse – then you’re really going to accelerate the number of people coming to the mainland,” Rubio said in an interview.

Seema Verma, head of the Centers for Medicare and Medicaid Services, told Reuters that the administration was working on a Medicaid proposal for the island but she gave no details.

”We’re looking at everything at this point. We want to make sure that we’re supportive of them to deal with this crisis – but also dealing with some of their baseline issues that they had with the healthcare system,” said Verma, who visited Puerto Rico last week.

The timing and legislative vehicle for any funding are not yet clear. The White House is working on another emergency relief package for Puerto Rico, expected in mid-November.

The Republican-controlled House of Representatives has proposed including $1 billion in stop-gap funding for Puerto Rico Medicaid as part of a bill to renew funding for the Children’s Health Insurance Program.

As Puerto Rico is a territory and not a state, its residents do not pay federal income taxes. Washington, which shares the cost of Medicaid with states, has long capped spending to territories.

The result: low-income states such as Mississippi get 75 percent of their Medicaid bill covered by Washington, while only about 12 percent of Puerto Rico’s costs are covered under the cap.

Six weeks after Maria tore through Puerto Rico, the island is struggling to pick up the pieces, and about two-thirds of its residents remain without power.

The territory declared bankruptcy earlier this year and the storm has plunged its economy into deeper uncertainty, exacerbating the Medicaid crisis.

“I am worried about my patients. I am worried about myself. I have a family and obligations,” said Ivan Gonzalez-Cancel, a heart surgeon at Centro Cardiovascular de Puerto Rico, who said he expects the territory to run out of Medicaid money in February.

“I have been talking to many people for years saying, ‘We need a Plan B,’” Gonzalez said. “They are counting on that money.”

The hurricane is one of several massive disasters to hit the United States over the past three months. Congress has approved more than $51 billion in emergency aid since September and will consider another aid request this month.

Carlos Mercader, a spokesman for the governor, said he hoped federal attention to Puerto Rico’s hurricane woes would lead to a longer-lasting fix for its Medicaid problems.

But Joe Antos, a healthcare economist at the American Enterprise Institute, said that might be a tough sell in Washington, given the island’s long list of needs.

“They have had no traction on this issue, whatsoever, for decades,” Antos said. “This is just a very bitter frosting on a really tough cake.”

Glowing in the dark, GMO chickens shed light on bird flu fight
15th anniversary of polio-free certification in the European Region – but the hard work to prevent future cases is not over