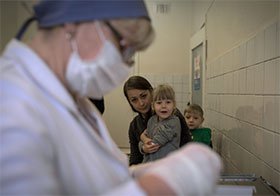 This year on World Polio Day (24 October) the WHO European Region is celebrating the 15th anniversary of being certified free from poliomyelitis (polio). Achieving this back in 2002 was a vital step forward for both the Region and the world on the path towards global eradication of this crippling disease. While this target is now closer than ever before, the threat from polioviruses still hangs over the Region, and maintaining and improving vaccination coverage is as important as ever.

As long as polio circulates anywhere in the world, there is a risk of importation into the European Region. Vaccination coverage across the Region is generally high: some countries reach 98% coverage with the third dose of polio vaccine. Nevertheless, far too many Member States fall short of the 95% recommended coverage for all vaccines. Overall, 1 in 15 children in the Region is not receiving the full set of routine immunizations on time, and vaccination coverage overall has decreased in the last five years.

“As we get closer to interrupting poliovirus transmission, countries will need to look carefully at their own circumstances and make assessments of their own risks and the appropriate actions,” continues Professor Salisbury. “Where population immunity is low, wild virus or vaccine-derived virus transmission can happen.”

Success in the current phase of poliovirus eradication will require sustained and painstaking effort on the part of every Member State in the Region to minimize the risk of a polio outbreak. This includes ensuring high vaccination coverage to prevent possible circulation of the virus, high-quality disease surveillance to detect any cases and effective poliovirus containment.

The WHO European Region has the highest number of poliovirus research and manufacturing facilities in the world. Breaches in containment occurred in Belgium in 2014 and the Netherlands in 2017. Professor Salisbury explains: “We have had two instances of failures of containment in this Region. The Regional and Global Commissions will need to have the evidence required to allow us to continue to declare that the European Region is free from polio, and I trust that each country will make the efforts necessary to maintain this status.”