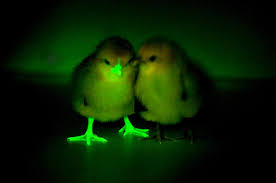 In the realm of avian research, the chicks with the glow-in-the-dark beaks and feet might one day rock the poultry world.

British scientists say they have genetically modified chickens in a bid to block bird flu and that early experiments show promise for fighting off the disease that has devastated the U.S. poultry and egg industries.

Their research, which has been backed by the UK government and top chicken companies, could potentially prevent repeats of this year’s wipeout: 48 million chickens and turkeys killed because of the disease since December in the United States alone.

But these promising chickens – injected with a fluorescent protein to distinguish them from normal birds in experiments – won’t likely gatecrash their way into poultry production any time soon. Health regulators around the world have yet to approve any animals bred as genetically modified organisms (GMOs) for use in food because of long-standing safety and environmental concerns.

Bird flu has become a global concern among researchers over the past decade because of its threat to poultry and human health, and UK researchers have been toiling in genetic engineering for years to control its spread.

People who are in close contact with infected poultry are most at risk for flu infections, and scientists are concerned about the risk for a human pandemic if the virus infects someone and then mutates. No humans have been infected in the latest U.S. outbreak, but there have been cases in Asia in recent years.

“The public is obviously aware of these outbreaks when they’re reported and wondering why there’s not more done to control it,” said Laurence Tiley, a senior lecturer in molecular virology at the University of Cambridge, who is involved in the experiments.

Scientists argue that GMO livestock could help control diseases and feed the world’s growing population. But if salmon’s arduous swim to approval is anything to go by, their breakthroughs will be slow to come to market.

The U.S. Food and Drug Administration (FDA) has been reviewing a type of GMO salmon for the past 20 years, even though the agency deemed it safe for humans in 2010. Developed by AquaBounty Technologies Inc, it was engineered to grow faster than normal.

Consumer activists have pushed back hard against GMO animals for food, arguing that GMO crops, already widely used and marketed, contribute to health and environmental problems.

At Cambridge and the University of Edinburgh’s Roslin Institute, scientists are using genetic engineering to try to control bird flu in two ways: by blocking initial infections in egg-laying chickens and preventing birds from transmitting the virus if they become infected.

Two of the world’s biggest chicken breeders, Germany‘s EW Group and Arkansas-based Cobb-Vantress, have funded parts of the research, though they too harbor significant reservations about GMO breeding.

EW Group is interested in research to learn more about how chickens respond to flu, said Jim McKay, group director for science and technology. However, the company has a policy against breeding GMO animals and feels consumers are not ready to accept them in the food chain.

Cobb-Vantress, owned by top U.S. chicken company Tyson Foods Inc, has stopped supporting research into GMO chickens “at this time” because there is no approved commercial use, said Mitch Abrahamsen, vice president of research and development.

To genetically engineer chickens, the UK researchers inject a “decoy” gene into a cluster of cells on the yolk of a newly laid egg. The egg will hatch into a chick containing the decoy gene, which it will be able to pass on to its offspring.

The decoy gene is injected into the chicken chromosome alongside the fluorescent protein that makes the birds glow under ultraviolet light, similar to glow-in-the-dark posters in college dorm rooms. The birds would not be bred to glow if they are commercialized.

When the modified birds come into contact with the flu, their genetic code is designed to trick the virus into copying the decoy and to inhibit the virus’ ability to reproduce itself.

In one study with a form of decoy, scientists put 16 infected conventional chickens in contact with a mixture of 16 normal and 16 GMO chickens that contained a decoy. The GMO birds were found to be less susceptible and succumbed to infection more slowly than the conventional birds, said Tiley.

A more flu-resistant bird could be a notable advance from the basic steps that farmers now rely on to avoid infections in barns, including banning visitors and disinfecting vehicle wheels.

Wild ducks, which can carry the virus, are thought to have spread the disease in the United States by dropping contaminated feces and feathers on farms. Humans can then transport the disease on their boots and trucks.

The first GMO animal, a mouse, was produced in the 1980s for research purposes, according to the U.S. FDA. In 2009, the agency approved an anticoagulant derived from a GMO goat.

The FDA said “there are many reasons for producing” GMO animals and that it could not provide a timeline for a decision on the GMO salmon. The British researchers have not asked the agency to review the GMO chickens.

“We’ve got enough positive results to make us think it’s worth taking it further,” said Helen Sang, who took part in the flu experiments and is the Roslin Institute’s personal chair in vertebrate molecular development.

“The benefit could be enormous.”