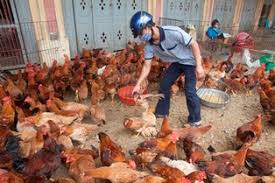 A case of the low-risk bird flu strain H7N7 has been found on a poultry farm in Emsland in north Germany, the state of Lower Saxony said on Monday.

The 10,000 egg-laying hens on the farm have been culled, the state’s agriculture ministry said in a statement.

The H7N7 bird flu strain was also confirmed at a farm in England on July 13.

Outbreaks of the highly pathogenic H5N1 bird flu was reported in Iran in June while the United States is suffering an outbreak of bird flu in its milder forms.

The case in Emsland was discovered by the farm’s own internal checks, the Lower Saxony ministry said. The source is still being investigated.

A quarantine zone with a radius of 3 kilometers has been set up around the farm along with a 10-kilometre observation zone, the ministry said.