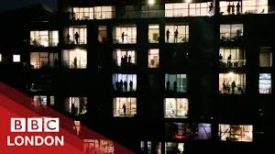 The UK thanks frontline coronavirus staff as firefighters agree to drive ambulances to help the NHS.

People around the UK have taken part in a “Clap for Carers” tribute, saluting NHS and care workers dealing with the coronavirus pandemic.
The Royal Family and the prime minister joined well-wishers who flocked to their balconies and windows to applaud.
A message from the NHS on social media described the tribute as “emotional”.
Meanwhile, firefighters have agreed to drive ambulances, deliver supplies and help to move bodies if needed to aid the UK response to the pandemic.
There are about 48,000 firefighters and control staff in the UK – but hundreds are already self-isolating because of coronavirus, the Fire Brigades Union (FBU) said.
The union is calling for tests to be quickly made available to its members to retain safe staffing levels. Matt Wrack, head of the FBU, said the virus would be a “huge challenge”, but firefighters were “keen to do whatever they can”.
On Thursday, the number of coronavirus deaths in the UK jumped by more than 100 in a day for the first time. The death toll has risen from 475 to 578, health officials said, with 11,658 confirmed cases.

In other developments:
■ The Metropolitan Police is calling for former police officers who retired in the last five years to return to the force, either as paid police constables and sergeants or as volunteers. Meanwhile, Met Commissioner Dame Cressida Dick said the vast majority of the public are complying with the new rules – but officers have been telling people who are gathering in groups of more than two to go home
■ Councils are being asked by the government to house all rough sleepers by the weekend, the charity Crisis said
■ The government is expected to announce that any worker who cannot take annual leave because of the virus can carry it over to the next two leave years
■ UK supermarkets are to use a government database of 1.5 million vulnerable shoppers to help prioritise delivery slots for them
■ Guidance for health workers on personal protective equipment (PPE) is expected to be updated within two days after calls for clarification from frontline staff
■ The Liberal Democrats have suspended their leadership campaign for a year so the party can focus on scrutinising the government’s response to the pandemic
■ The family of a GP in Leigh-on-Sea, Essex, who has died of suspected coronavirus says he sacrificed his life for his profession
■ The Department for Housing advised buyers and renters to delay moving home while measures against the virus are in place
■ A report from London researchers suggests more than 30 million lives around the world could be saved during the pandemic if countries act quickly

In an Instagram message to mark the Clap for Carers event, the Queen said the country was “enormously thankful” to the people on the frontline of the UK’s response to the virus, which causes the Covid-19 disease.
She said the UK was grateful “for the expertise and commitment of our scientists, medical practitioners and emergency and public services”.

And a video posted by Kensington Palace showed Prince George, Princess Charlotte and Prince Louis clapping to thank all those healthcare staff “working tirelessly” to help those affected by Covid-19.

The Prince of Wales, the Duchess of Cornwall and their staff all separately joined in with a round of applause at Birkhall in Scotland.
Charles, who has tested positive for coronavirus, and Camilla are isolating from each other and their small number of staff.

As people all over the UK went to their doorsteps and windows to take part in the round of applause, a number of celebrities shared updates about how they were paying their respects to healthcare workers.

The Clap for Carers campaign, which started online, was staged because “during these unprecedented times they need to know we are grateful”, according to the organisers.
At the same time, landmarks including Belfast City Hall, Principality Stadium in Cardiff and the London Eye were lit up as part of the #lightitblue salute.

Actress Michelle Collins shared a video taken from outside her north London home showing people taking part in the salute.
She said that the tribute had “made her cry”, adding: “We love our NHS stay safe everyone emotional day.”
In the video, she can be heard telling neighbours that they need “a big street party when this is all over”.

TV presenter Ben Fogle shared a video of his family applauding health care workers in his living room next to a placard saying “thank you NHS”.
He tweeted: “We love you NHS. We salute every one of you. Our heroes.”

Star Wars actor John Boyega said it was “beautiful” hearing his neighbours “shout and clap for the NHS”.
And BBC Radio 1 DJ Greg James also praised the salute on Twitter.
He wrote: “Oh my God that was properly brilliant wasn’t it. Also, most brilliantly British thing ever bashing pots and pans.
“Extraordinary times can only be overcome with extraordinary acts of humanity.”

The national round of applause came after the unveiling of a support package from the government to give millions of self-employed people a grant worth 80% of their average monthly profits to help them cope with the financial impact of coronavirus.
The money – up to a maximum of £2,500 a month – will be paid in a single lump sum, but will not begin to arrive until the start of June at the earliest.
Wage subsidies of 80% for salaried employees were announced last week.
Labour’s shadow chancellor John McDonnell said “there are gaps” however, with some self-employed people not included in the scheme.
“The big issue that has come from most of them is having to wait until June for payments,” he said. “Some are saying ‘look we can’t survive beyond the next few weeks’.”
Business Secretary Alok Sharma said he understood people would be worried about paying their bills, adding that “if we can do it faster, we will”.
He told BBC’s Radio 4 Today programme the new measures were “unprecedented”. “We’re effectively going to be building a new system to make sure we get support to people,” he said.
■ UK government unveils aid for self-employed
■ What help will self-employed get from government?
Meanwhile, the digital secretary has urged social media users to do their bit in tackling coronavirus-related misinformation.
Cabinet minister Oliver Dowden said the public must “remain absolutely vigilant to inaccurate stories”.
SOURCE: BBC NEWS