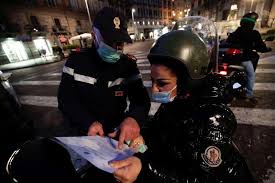 WHO calls coronavirus a pandemic as Britain, Italy shore up defenses – Reuters

GENEVA/LONDON (Reuters) – The World Health Organization described the coronavirus outbreak as a pandemic for the first time on Wednesday as Britain and Italy announced multi-billion-dollar war chests to fight the disease.

The United States also said it was considering new steps to battle the virus that emerged in China in December and has spread around the world, halting industry, grounding flights, closing schools and forcing events to be postponed.

We have therefore made the assessment that COVID-19 can be characterized as a pandemic,” he said, using the formal name of the coronavirus.

There are now more than 118,000 infections in 114 countries and 4,291 people have died of the virus, with the numbers expected to climb, Tedros said.

Use of the word pandemic does not change the WHO’s response, said Dr Mike Ryan, the head of the Geneva-based agency’s emergencies program.

WHO officials have signaled for weeks that they may use the word “pandemic” but said it does not carry legal significance. The WHO classified the outbreak as a “public health emergency of international concern” on Jan. 30, triggering an increase in global response coordination.

“The use of this term (pandemic) however highlights the importance of countries throughout the world working cooperatively and openly with one another and coming together as a united front in our efforts to bring this situation under control,” said Nathalie MacDermott, an expert at King’s College London.

Mark Woolhouse, professor of infectious disease epidemiology at Britain’s Edinburgh University, added: “It is now clear that COVID-19 is going to be with us for a considerable length of time and the actions that we take must be actions that we can live with for a prolonged period.”

Before the WHO’s comments, Italy – the European country worst hit by the virus – and Britain announced they were setting aside large sums to fight the flu-like disease.

Britain launched a 30-billion-pound ($38.54 billion) economic stimulus plan as new finance minister Rishi Sunak said the economy faced a “significant impact” from the spread of the virus, even if it was likely to be temporary.

“Up to a fifth of the working-age population could need to be off work at any one time. And business supply chains are being disrupted around the globe,” Sunak said in an annual budget speech to parliament.

He announced a package of measures to help companies facing a cash-flow crunch, including a year-long suspension of a property tax paid by smaller firms. The health system and other public services would receive an extra 5 billion pounds to help counter the spread of the coronavirus.

Last week, Italy’s cabinet said it would need 7.5 billion euros ($8.46 billion) to fight the virus, but since then the emergency has escalated and the nation, already close to recession, is under lockdown, with the death toll now 827.

Prime Minister Giuseppe Conte on Wednesday earmarked $28.3 billion to ease the economic impact. He said that already tough restrictions on movement might be tightened further after the northern region of Lombardy, centered on Italy’s financial capital Milan, asked for all shops to shut and public transport to close.

The United States, where the S&P 500 stock index was down almost 4%, said its steps could include tax relief that could channel hundreds of billions of dollars into the U.S. economy.

The WHO’s Ryan said the situation in Iran was “very serious” and the agency would like to see more surveillance and more care for the sick. Iran has reported 237 deaths from the virus.

German Chancellor Angela Merkel said up to 70% of the population was likely to be infected as the virus spreads around the world in the absence of a cure.

A rebound in stocks ran out of steam on Wednesday despite the Bank of England move. Money markets are fully pricing in a further 10 basis-point cut by the European Central Bank when it meets on Thursday.

As of Tuesday’s close, $8.1 trillion in value had been erased from global stock markets in the recent rout.

But not all the news was bad. Some key industries in Wuhan, the Chinese city at the epicenter of the epidemic and a hub of car manufacturing, were told they could resume work on Wednesday, a day after President Xi Jinping visited the city for the first time since the outbreak began.