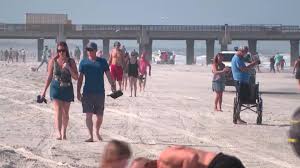 Turkey’s coronavirus death toll rises by 126 to 1,769: health minister – Reuters
This is where all 50 US states stand on reopening – CNN