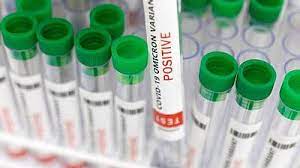 (Reuters) – The following is a summary of some recent studies on COVID-19. They include research that warrants further study to corroborate the findings and that has yet to be certified by peer review.Experimental pill shows promise against OmicronAn experimental drug being developed by RedHill Biopharma Ltd that improved outcomes in a randomized trial involving severely ill COVID-19 patients infected with earlier versions of the coronavirus is showing promise against the Omicron variant in test tube experiments, researchers said.The oral drug, opaganib, has dual anti-inflammatory and antiviral effects. When opaganib was added to treatment with Gilead Sciences’ remdesivir and corticosteroids in hospitalized patients infected before Omicron was predominant, it improved the average time until patients no longer had detectable virus in their blood by four days, sped up recovery by 34%, and reduced mortality by 70%, compared to a placebo, according to data released previously by the company but not yet formally published. On Monday, the company announced that in lab experiments, opaganib kept Omicron virus particles from reproducing themselves.Opaganib’s antiviral/anti-inflammatory mechanism “is expected to act independently of viral spike protein mutations and remain effective against Omicron subvariants BA.2, XE and other emerging and future variants,” the company said.Well-controlled HIV does not impair mRNA vaccine responsePeople living with well-controlled HIV infections are likely to have immune responses to the mRNA COVID-19 vaccines from Moderna and from Pfizer/BioNTech similar to those of otherwise healthy individuals, according to new data.Researchers studied vaccine responses in 166 people living with HIV who were taking antiretroviral therapy (ART) at one month after they received their second shot. They also looked at responses in 169 healthy individuals. At the start, 32 patients had CD4 T cell counts below 200 – a low level of these immune cells that correlates with poorly controlled HIV and high risk for serious illness – 56 had CD4 counts of 200-500, and 78 had CD4 counts over 500, indicating well-controlled HIV. After accounting for patients’ other risk factors, the group with poorly controlled HIV had only low levels of COVID antibodies and other immune response markers after vaccination, researchers reported in Clinical Infectious Diseases. Compared to the healthy volunteers, participants with moderately well controlled HIV had a somewhat weaker antibody response to the vaccines, but there was no difference in immune responses between the healthy volunteers and the patients with well-controlled HIV.The results suggest that mRNA vaccines can elicit a robust immune response against SARS-CoV-2 in most people living with HIV and receiving ART, the researchers concluded. Patients with CD4 counts below 200 should receive a booster dose, they said. Boosters could also “be reasonably offered” when the CD4 count is between 200 and 500, given that these patients’ responses were weaker than responses in the healthy comparison group, the researchers said.Antibiotics, steroids often incorrectly used for COVID-19Significant numbers of U.S. patients with COVID-19 who were not sick enough to be hospitalized were inappropriately prescribed antibiotics or steroids in 2020 and 2021, according to two studies published on Friday in JAMA.One study found that between April 2020 and April 2021, antibiotic prescriptions were written during 30% of outpatient visits for COVID-19 among Medicare beneficiaries, even though antibiotics kill bacteria, not viruses. A separate study points out that while steroids are known to benefit severely ill hospitalized patients with COVID-19, the U.S. National Institutes of Health (NIH) advises against their use in patients with mild-to-moderate illness from the coronavirus. Still, the researchers found, between April 2020 and August 2021, steroids – which can lead to a host of adverse side effects – were prescribed to 16.4% of 576,885 nonhospitalized COVID-19 patients in a Medicare database and 9.4% of 766,105 such patients in a database maintained by the U.S. Food and Drug Administration. The prescriptions appeared to be more prominent in the South. In both databases, the use of steroids rose steadily over time.“Given the increasing use of corticosteroids through August 2021, the potential (danger)… and the lack of efficacy data in patients with mild to moderate COVID-19, it is critical that prescribers consider the NIH guidelines in the therapeutic management of nonhospitalized patients with COVID-19,” the authors of the steroid study said.