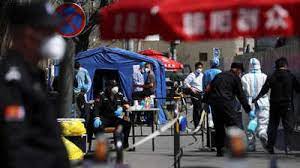 SHANGHAI, April 8 (Reuters) – Shanghai’s unusually high proportion of asymptomatic cases among its reported COVID-19 infections could be partly explained by blurred lines between “mildly symptomatic” and asymptomatic cases.Authorities in China’s financial centre ordered a lockdown in response to the worst outbreak in the country since the virus first emerged in Wuhan in late 2019. Shanghai counted more than 20,000 new cases on April 7, but the asymptomatic rate has stood at around 97%, far higher than anywhere else in the world, where it has been closer to 50%.Fu Chen, head of the municipal Center for Disease Control and Prevention, said in a written reply to Reuters’ questions that Shanghai’s rapid surveillance testing was contributing to the big asymptomatic numbers by catching infections earlier.He also said high vaccination rates were also having an impact, as vaccinated people are less likely to show symptoms.Fu did not say directly that Shanghai was using less strict diagnostic criteria, but he did suggest the numbers in the rest of China would be comparable if “mildly symptomatic” cases were included in the asymptomatic tally.”Recently, a press conference of the State Council’s joint prevention and control mechanism also said that the proportion of mildly symptomatic and asymptomatic infections in hospitals across the country exceeds 95%,” Fu noted.The city government did not immediately respond to a request for comment on whether Shanghai uses different diagnostic standards compared to elsewhere.Asymptomatic cases in China are defined as those that test positive for coronavirus but have no “relevant” clinical manifestations, Fu said.The national guidelines define asymptomatic cases as those testing positive but showing no clinical symptoms like fever, and no signs of COVID in their lungs, as determined by a CT scan.Asymptomatic cases are reclassified if symptoms appear later.”Mildly symptomatic” cases are those that show light symptoms but no signs of pneumonia after a chest scan.The national standards say that determining an asymptomatic case requires a chest scan, which would put Shanghai’s medical system under immense pressure given the scale of the current outbreak. It is unclear how many asymptomatic cases in Shanghai or elsewhere underwent lung CT scans.Paul Hunter, a professor of medicine at the University of East Anglia, told Reuters it would be “absolutely crazy” for anywhere to scan everybody who tested positive.In Jilin province in China’s northeast, site of another major outbreak, asymptomatic cases have accounted for less than half of reported infections, though the figure has been increasing steadily to around 60% in recent days.But according to Reuters calculations, if Jilin’s mildly symptomatic cases are added to the asymptomatic tally, the share would rise to more than 96% – similar to Shanghai’s asymptomatic numbers.Unlike other countries, China counts asymptomatic cases separately, even though all COVID-positive cases are isolated in central quarantine facilities, whether they show symptoms or not.’IRRESPONSIBLE’Chinese netizens have accused Shanghai of putting mildly symptomatic cases in the asymptomatic column in order to allay public concerns about the potency of the highly transmissible Omicron variant. The city had initially used a more surgical approach to curbing infections in hopes of avoiding heavier measures. “Shanghai’s definition of ‘asymptomatic’ … has not only rendered national statistics meaningless but it has also rendered the delineation of risk zones meaningless,” said one Weibo user writing under the user name Chairman Rabbit.Overseas experts also remain sceptical, with university of Minnesota epidemiologist Michael Osterholm saying the ratio “just does not make any biologic sense at all.””At this point I just challenge the authenticity of data.”Fu said Shanghai’s high proportion of asymptomatic cases also reflected the reduced potency of the Omicron, and he said most cases involved relatively young, more resilient, people, who were more likely to have been vaccinated.He noted that 22 million residents had already received two jabs and more than 11 million had boosters, making them less vulnerable to illness.”Mass immunity is getting stronger,” he said.