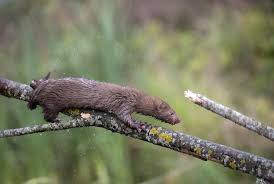 The United States Department of Agriculture (USDA) said on Monday that mink at two farms in Utah tested positive for the novel coronavirus, the first such confirmed cases in the animal in the country. People who had contact with the animals have also tested positive for the virus, which causes COVID-19 in humans, the agency said. (bit.ly/3aykgCI)Tests were carried out after unusually large numbers of mink died at the farms, the agency said. The animal, which is bred for its fur, is known to be susceptible to SARS-CoV-2, the agency said, after mink carrying the virus were found on four of the 155 farms in the Netherlands. Two cats in New York became the first pets in the United States in April to have contracted the coronavirus, although there is no evidence of pets spreading the virus to humans. (reut.rs/3h57JZT)The USDA said there was currently no evidence that animals, including mink, play a significant role in spreading the virus to human. Limited information shows low risk of coronavirus spread to humans from animals, but more information is needed to determine if animals could play a role in the spread of the virus, the agency added.