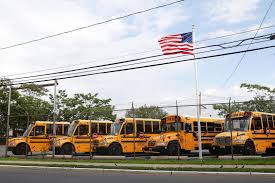 COVID-19 forces some U.S. schools to close, as new cases remain high in most states – Reuters

Almost as quickly as they welcomed students back, some U.S. schools are closing again due to outbreaks of COVID-19, the latest challenge as the nation tries to reopen while the level of new cases per day remains high in most states. Schools in the United States are set to reopen for the start of the academic year either this month or early September. Some – particularly in urban centers – have opted for online-only learning, while others have chosen in-person learning, or a hybrid of the two. But outbreaks or staffing shortages have forced some schools to halt in-person learning already. The University of North Carolina at Chapel Hill, one of the largest schools to reopen with in-person instruction, said on Monday it would switch to online-only teaching for undergraduates, after testing showed rapid spread of the virus. The percent of students testing positive rose to 13.6% from 2.8% in just the first two weeks of classes. Currently 177 students are in isolation and 349 are quarantined. In Georgia, a third high school in Cherokee County has closed for in-person classes, the county’s school district said, citing an increase in the number of positive cases at Creek view High School to 25, with nearly a third of students under quarantine. “As we have said since we announced our reopening, we will not hesitate to quarantine students and close classrooms in an effort to continue operating school in-person for as long as possible,” the district said in a statement on Sunday, postponing the planned start to in-person classes from Monday to Aug. 31.Cherokee County schools were featured in the national media earlier this month after students posted images on social media, showing pupils massed together in hallways, many of them not wearing masks. Georgia’s new cases are down slightly from their peak but the state reported over 20,000 new infections last week and a 12% positivity rate, which suggests there are more cases in the community that have not yet been uncovered. The problems in Georgia follow an Arizona school district having to cancel classes after staff said it was unsafe to return and called in sick. Greater Phoenix’s J.O. Combs Unified School District had been set to begin in-person learning on Monday, contravening state safety guidelines. A Nebraska school district said on Saturday it had canceled classes after three staff members tested positive and 24 more were in quarantine for exposure in the Broken Bow School District, about 190 miles (300 km) west of Omaha. Nationwide, new cases of COVID-19 fell for a fourth week in a row but infections remain at high levels in most states and deaths continue to average 1,000 people a day. Over 30 states have test positivity rates over 5% and Mississippi, Nevada, Florida and Idaho are over 16%.New York, once the epicenter of the coronavirus in the country, has an infection rate below 1%, along with Connecticut, Maine and Vermont. New York state Governor Andrew Cuomo said on Monday that gyms could reopen from next week. In total, there have been over 170,000 deaths in the United States from the disease, according to a Reuters tally. Officials at a school district in Oklahoma learned that one high school student attended the first day of classes on Thursday, even though the student had tested positive and had not completed the 10-day quarantine. “Upon speaking with the student, they said since they were asymptomatic then they believed their quarantine period was five days,” Dawn Jones, public information officer for Moore Public Schools told Reuters. The parents apologized for the misunderstanding.