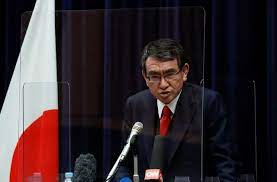 Japan’s vaccine minister says inoculation pace to accelerate in May

TOKYO (Reuters) -Japan’s vaccine minister, Taro Kono, said on Monday that the pace of coronavirus inoculation in the country would accelerate in May, but that the Tokyo Olympics, set to start in July, were not factoring into the schedule.

Prime Minister Yoshihide Suga has pledged to have enough doses for the country’s 126 million people by June, before the July 23 start of the Tokyo Olympics. Supplies have been trickling in from Pfizer Inc. factories in Europe, but are expected to accelerate in the coming months.

“Starting in May, there will be no bottleneck in supply,” Kono told Reuters in an interview. Officially the minister in charge of administrative reform, Kono was tapped in January to lead Japan’s COVID-19 vaccination push.

He added that he expected to be able to get 10 million doses of vaccines each week in May but that the Olympics, which a majority of Japanese have said should be postponed or cancelled, were not a factor in his scheduling.

“If we have somebody manufacturing vaccines in Japan, it would take off half my headache,” Kono said.

As of Friday, just over 780,000 people in Japan, mostly healthcare workers, have received at least one vaccine dose.

While Japan has escaped the worst ravages of the pandemic seen elsewhere, cases have begun ticking up again recently, prompting concern among some officials about a potential “fourth wave” of the pandemic. Adding to those concerns, a report quoted by NHK national television warned that the country’s vaccination pace might not be able to keep up with the increase in cases.

Kono said that while the vaccine prevents symptoms, people shouldn’t depend on it alone and need to maintain preventive measures such as wearing masks and hand washing.

Though he frequently tops public opinion polls as a top choice for prime minister, Kono sidestepped questions about when he might take up the job. A general election needs to be held later this year.