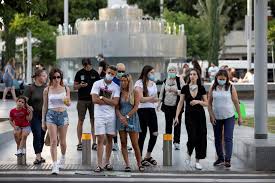 Israel will impose a partial national lockdown next week to battle a coronavirus infection surge, the head of its pandemic task force said on Thursday, shouting his exasperation in an emotional television address. The health official, Ronni Gamzu, said Israel was facing a “pivotal moment” in trying to contain the spread of COVID-19, with some 3,000 new cases now reported daily in a population of nine million. He put much of the blame on what he called apathy among the Arab minority to social distancing rules and high infection rates in close-knit ultra-Orthodox Jewish communities. Other health experts have said political in-fighting among members of Prime Minister Benjamin Netanyahu’s coalition government has led to a slow response to a second wave of cases after a national lockdown flattened the infection curve in May. “Please, no weddings now, no mass gatherings … anywhere,” Gamzu, his voice rising to a shout, implored on TV. “There are cities in Israel that will be put under curfew and closure in the coming week and face economic, social and personal hardship. ”He spoke after Netanyahu’s “coronavirus cabinet” approved on Thursday a lockdown of so-called “red towns” with high infection rates. About 30 communities, mainly with Arab or ultra-Orthodox populations, have already been put in that category. In the Arab town of Nazareth – identified by health authorities as “red” – residents have bypassed restrictions by having wedding parties and receptions at home, packing hundreds of people into driveways or gardens for events usually held in now-closed event halls. Nazareth’s municipality said after Gamzu spoke that it was being unfairly targeted. Gamzu said infection rates were also high in Jewish seminaries in ultra-Orthodox areas, and he appealed to religious leaders to ensure social distancing rules were followed. Israel’s school year began on Sept 1, with in-class teaching. There have been 122,799 confirmed coronavirus cases in Israel and 976 deaths.