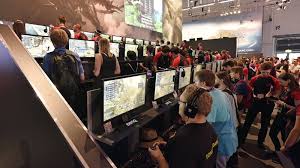 A competitive video-gaming organization will begin testing players for performance-enhancing drugs next month, as the field of so-called eSports moves further into the mainstream and prize pools climb.

The announcement by the Electronic Sports League came just weeks after one gamer admitted to using the stimulant Adderall at a tournament, sparking discussion around an issue that has long plagued traditional sports.

The ESL said in a statement on Thursday it would start administering randomized skin tests for the drugs at its ESL One Cologne event in Germany in August, a tournament for the first-person shooting game “Counter-Strike: Global Offensive” that boasts a $250,000 prize pool.

The ESL said it will partner with the World Anti-Doping Agency and Germany’s anti-doping agency to develop a policy on the issue, and aims to perform tests at all of its major events once the policy is established.

The ESL said it has long banned players from using drugs or alcohol at its events, like many other organizations, but that it will be the first to test its cyber athletes.

“The growing visibility and popularity of eSports, as well as increasing prize pools make it not only more tempting for teams and players to break the rules, but also more damaging to our sport as a whole when they do,” the ESL said in a statement.

“ESL has an ongoing commitment to safeguarding the integrity of our competitions and providing a fair playground for professional players,” it said.

Earlier this month, Kory Friesen, who now plays Counter-Strike for the team Nihilum Gaming, spoke about his performance with a former team at a recent $250,000 tournament.

In a video interview with another gamer, Friesen said the “hectic” nature of their communications had been due to his entire five-man team taking the amphetamine, Adderall.

“The ESL comms were kind of funny … I don’t even care, we were all on Adderall,” he said with a laugh. “Tons of people do it.”

The ESL is the world’s largest gaming organization, with more than 5 million registered league participants, according to its website. It hosts tournaments for many of competitive gaming’s top titles.

Among the games ESL holds events for is the multiplayer online battle arena title Dota 2. A Dota 2 tournament in August, in which the ESL is not involved, has a prize pool of more than $17 million.

What are the impacts of drugs on families?