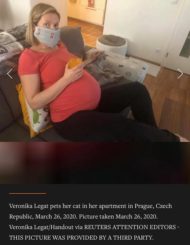 PRAGUE/MILAN (Reuters) – To prepare for the birth of her first child, Veronika Legat, a 35-year-old Czech lawyer, has cut off contact with her family and friends to avoid getting ill from the coronavirus or even catching a mild cold.

Her hospital told her that if she had any symptoms of a cold, a fever or runny nose, her newborn baby, due in April, may be isolated from her for two weeks as a precaution against the new disease. She might not be allowed to breastfeed.

“I’m not afraid of the virus but I feel angry,” Legat said from her home in Prague. “Until the birth, we are staying home, and won’t meet with anyone.”

As the coronavirus pandemic sweeps across Europe, prompting restrictions on public life and putting unprecedented strain on hospitals, pregnant women like Legat are preparing to give birth with a mixture of anxiety, anger and hope.

Some are worried about being separated from their babies. Others regret not being able to have a partner present at the birth. Many are having to accept reduced pre-natal medical appointments.

Healthcare authorities have introduced varying rules in different countries, deciding whether a woman can be accompanied during childbirth, for example, of if she must be separated from her baby if she is sick.

In some cases these rules are more stringent than recommendations issued by the World Health Organization (WHO), reflecting global uncertainty about how the virus acts and how best to prevent it spreading.

The WHO says there is no evidence that pregnant women are at higher risk of severe illness than the general population if they contract the COVID-19 disease, caused by the new coronavirus.

It recommends that women who have tested positive for the virus should be encouraged to care for and breastfeed their newborns as normal, provided they maintain stringent hygiene.

AFRAID OF BEING ALONE

Marika Antolec-Walczak, 34, a judge from Tychy in southern Poland, knew if she went into labour early she would not have been able to travel to her nearby hospital, converted into an infectious disease unit because of the pandemic.

But what she was most afraid of was being alone.

“The first two times I gave birth, my husband was indispensable in helping me cope with the pain,” she said.

Most hospitals in Poland do not allow women to be accompanied during childbirth, even though the WHO recommends “having a companion of choice present during delivery”.

“It’s a threat not only to the patient and the child but also to medical personnel,” said Michal Bulsa, an obstetrician in Szczecin, a city in northwestern Poland. “I wouldn’t allow it.”

For women elsewhere in Europe, having a partner share the experience of childbirth is an option. In Italy, which has been the hardest hit by the disease in Europe, some hospitals allow women to be accompanied during the birth, but not afterwards.

The challenges of giving birth during the coronavirus crisis do not end there.

Some women have been told not to arrive at the hospital too early – a tough call to make, especially for first-time mothers – to minimise the chance of infecting others or being infected.

Shopping for a newborn is also tough, with most stores closed in many parts of Europe. Borrowing a crib from a friend in another town may no longer be possible with travel restricted across much of the continent.

Valentina Draghi, a 41-year-old speech therapist from Milan, started her maternity leave in February, weeks before her April 7 due date.

She had hoped to go shopping for clothes with her baby girl’s grandmothers and attend prenatal classes.

“All of a sudden nothing of what I had planned is left,” she said.

She was told she would have to go through labour wearing a protective mask.

“My partner may be present, but in two weeks I do not know what will happen,” she said. “My biggest fear is that they won’t let him in. I know it’s forbidden elsewhere.”

“It’s my first pregnancy. I’m 41 years old. I’d like it to be a unique and important event,” she said.

For Louise Koldsgaard, trusting the healthcare system in Denmark gives her a sense of calm.

“My midwife told me: maternity wards have never been cleaner,” she said. “I try not to let it get to me too much. I still walk my dog every day and drink coffee at the local shop.”

But Brandon Allen, 48, from Detroit in the United States, fears what awaits his family beyond the birth of his fourth child due next week.

“It’s surreal. I’ve never seen anything like this in my life,” he said. “People around me I know are dying.

“I’m freaking out about that. We are bringing a baby into this pandemic,” he said.