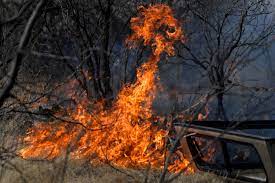 March 18 (Reuters) – A series of wind-driven wildfires was burning in a sparely populated area of West Texas on Friday, consuming more than 45,000 acres of dry grasslands and forcing the evacuations of some residents from their homes, fire officials said.The Eastland Complex, made up of four fires that sparked as early as Wednesday amid low humidity and gusty winds, was only 4% contained as of the afternoon, said the Texas A&M Forest Service.Officials ordered evacuations in areas of Eastland County, with a population of about 18,000, about 90 miles west of Fort Worth, according to the National Wildfire Coordinating Group. That included about 475 homes in the town of Gorman, it said.The towns of Carbon and Lake Leon were also evacuated and Highway 6 in Carbon was closed, the agency said.Evacuations were also ordered in Brown and Comanche counties, KTVT reported, adding that a church and other buildings in the town of Ranger had burned.Strong winds and critically dry grasses helped the fires spread at a fast pace, while making it difficult for crews to contain, the Texas A&M Forest Service said.