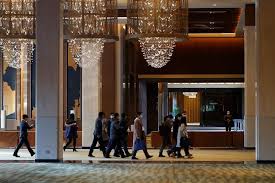 A World Health Organization-led team investigating the origins of the COVID-19 pandemic will meet Chinese scientists on Friday and plans to visit labs, markets and hospitals in Wuhan, the WHO said. The team left its quarantine hotel in Wuhan on Thursday to begin field work, two weeks after arriving in the Chinese city where the virus emerged in late 2019. The mission has been plagued by delays, concern over access and bickering between China and the United States, which has accused China of hiding the extent of the initial outbreak and criticised the terms of the visit, under which Chinese experts conducted the first phase of research. “The team plans to visit hospitals, laboratories and markets. Field visits will include the Wuhan Institute of Virology, Huanan market, Wuhan CDC (Center for Disease Control and Prevention) laboratory,” the WHO said in a tweet. The team of independent experts, due to remain for two more weeks in China, will also speak with some of the first COVID-19 patients in Wuhan, it said. “All hypotheses are on the table as the team follows the science in their work,” it said, adding: “They should receive the support, access and the data they need.” Thea Fischer, a Danish team member, said visiting the Huanan Seafood Wholesale Market, where the virus was initially believed to have spread, would provide insight into whether it was the epicenter of the outbreak or just an amplifier of the virus. “It is now that the actual field work can begin, and it is my expectation that for this part of the mission we will have unhindered access to the requested destinations and individuals,” Fischer told Reuters by phone from Wuhan. “But it is important to remember that the success of this mission and origin-tracing is 100% depending on access to the relevant sources. No matter how competent we are, how hard we work and how many stones we try to turn, this can only be possible with the support from China,” she said. RELIEF After leaving their quarantine hotel without speaking to journalists, team members boarded a bus to a lakeside hotel, where part the building and grounds were cordoned off. Several team members described long work days during their quarantine, and relief at being able to leave their rooms. “Slightly sad to say goodbye to my ‘gym’ & my ‘office’ where I’ve been holed up for last 2 wks!!,” team member Peter Daszak said on Twitter, along with photos of exercise equipment and a desk in his hotel room. The team members’ luggage, loaded onto the bus by workers in protective suits, included yoga mats and what appeared to be a guitar case. Hours before the WHO annnounced their planned visits, WHO Director-General Tedros Adhanom Ghebreyesus tweeted: “Thanks, Chinese Health Minister Ma Xiaowei, for a frank discussion on the #COVID19 virus origins mission.” The WHO has sought to manage expectations. “There are no guarantees of answers,” WHO emergencies chief Mike Ryan told reporters this month. China’s foreign ministry said the team would participate in seminars, visits and field trips. The origin of COVID-19 has been highly politicised. The investigating team had been set to arrive in Wuhan earlier in January, and China’s delay of their visit drew rare public criticism from the head of the WHO, which former U.S. President Donald Trump accused of being “China-centric” early in the outbreak. China has pushed the idea that the virus existed abroad before it was discovered in Wuhan, with state media citing the presence of the virus on imported frozen food packaging and scientific papers saying it had been circulating in Europe in 2019. China’s foreign ministry has also hinted that the sudden closure of a U.S. army laboratory at Fort Detrick in Maryland in July 2019 was linked to the pandemic. #manchesterunited#manchestercity#HealthForAll#HealthBroadcastingService#tampabaybuccaneers#Covid-19#jeremypruitt#fcjuarez#dallasstars#losangeleslakers#HealthBroadcastingServiceInPublicHealthPartnership#moselle#dallasmavericks#kobebryant#liverpoolfc#gremiofootballportoalegrense#deutscherwetterdienst#washingtonfootballteam#cicelytyson#bitcoin#ohiostatebuckeye#sacramentokings#lasvegasraiders#brooklynnets#sleep#tottenhamhotspur#fcbayernmunich#robotics#larryking #aoc #dogecoin#liverpoolfcandcrystalpalacefc#kentuckywildcats#momentswithannie #losangeleslakers #phoenixsuns#gonzagabulldogs #conormcgregor#losangelesclippers#bridgetjones#googleboxhttps://www.reuters.com/…/us-health-coronavirus-who..