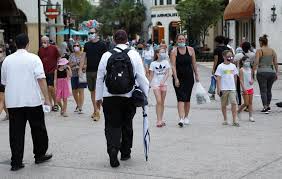 Actors who had objected to Walt Disney Co’s (DIS.N) proposed coronavirus safeguards at the Walt Disney World theme park have reached an agreement to return to work, according to a union statement on Wednesday. The Actors’ Equity Association said Disney had committed to providing COVID-19 tests at the Florida theme park for its members, who cannot wear protective masks while performing as other employees do. Walt Disney World reopened to the public on July 11 with several safety measures including limited attendance, social distancing in lines and on rides, and mask requirements for guests and staff. Actors’ Equity, which represents roughly 750 stage performers at the park, publicly said the measures did not go far enough to protect its members and called for regular testing. Disney then decided to open the theme park without those performers. On Wednesday, the union said the differences had been resolved. “I’m happy to announce that Equity’s executive committee has signed a memorandum of understanding with Disney for Equity performers to return,” Kate Shindle, president of the Actors’ Equity Association, said in a statement.