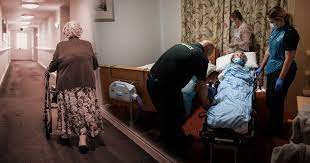 LONDON (Reuters) – The British government said it would not appeal a court decision that it had acted unlawfully early in the COVID-19 pandemic when it moved elderly patients from hospitals to care homes without considering that people without symptoms could spread the virus.Last month a judicial review, instigated by the families of two care home residents who died of the virus, found that several of the policies on moving patients from hospitals to care homes had been introduced or retained unlawfully.“While we are disappointed that the court did not accept all of the points we put before it, we do not see a public interest in an appeal on those points, as the right place for these matters to be considered is the public inquiry,” a government spokesperson said.