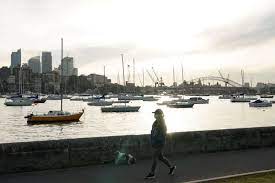 SYDNEY, July 9 (Reuters) – Australian authorities on Friday pleaded with Sydney residents to stay at home, warning a three week lockdown may be extended as they struggle to control a COVID-19 outbreak, with the city reporting its the biggest rise in local cases for the year.

Hundreds of extra police patrolled parts of Sydney to enforce the city’s lockdown orders imposed to stamp out an outbreak of the highly infectious Delta variant which now has a total of more than 400 cases.

“At the moment the numbers are not heading in the right direction.”

Fourty-four locally acquired cases were reported on Friday in NSW, Australia’s most populous state, eclipsing 38 a day earlier, with 29 of those having spent time in the community while infected. There are currently 43 cases in hospital, with 10 people in intensive care, four of whom require ventilation.

The rise in cases is despite a two week lockdown which has now been extended to a third week ending July 16.Authorities will tighten restrictions in Sydney from Friday evening with public gatherings limited to two people and residents limited to within 10 kms (6 miles) of their home.

Berejiklian ruled out any suggestions of “living with the virus” considering the low vaccine coverage in Australia.”If we choose to live with this while the rates of vaccinations are at 9%, we will see thousands and thousands of hospitalisations and deaths,” Berejiklian said.

Although Australia has fared much better than many other developed countries in keeping its COVID-19 numbers relatively low, its vaccination rollout has been among the slowest due to supply constraints and changing medical advice for its mainstay AstraZeneca (AZN.L) shots.

Australian Prime Minister Scott Morrison on Friday said Pfizer will increase COVID-19 vaccine delivery to about one million doses a week from July 19, more than tripling shipments, as Sydney battles its worst outbreak of this year.

As many as 4.5 million Pfizer Inc (PFE.N) doses that were expected to arrive in September will become available next month, Morrison said.

“So that’s ramping up … and so we are really hitting our marks now. I know we’ve had challenges over the course of the last four months but we’re hitting those marks now,” Morrison told broadcaster Nine News.