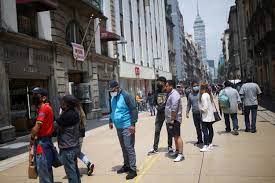 MEXICO CITY (Reuters) – Mexico reported 9,452 new confirmed COVID-19 infections on Thursday, according to data from the health ministry, as case numbers continued to rise this week amid signs of a resurgence in the pandemic.

The ministry also registered 266 additional fatalities, bringing Mexico’s total tally to 2,567,821 infections and 234,458 deaths, according to the data.

The government has said the real number of cases is likely significantly higher, and separate data published recently suggested the actual death toll could be 60% higher than the official count.