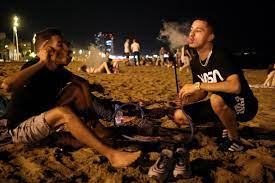 MADRID, April 8 (Reuters) – Barcelona beachgoers will no longer have to contend with cigarette butts or passive smoke starting in July when Spain’s second largest city will ban smoking on all its beaches, the city hall said on Friday.The decision comes after a pilot project las year saw smoking banned on four of the city’s 10 local beaches.”Beaches with no smoking allowed will offer healthier communal living areas, with less waste and will respect the defence of environment,” the statement said.Several Spanish regions imposed bans in 2020 to clamp down on the spread of COVID-19, while others like the Balearic Islands, including Mallorca, had already adopted the measure before the pandemic for environmental reasons.The Canary Islands, Andalusia, Galicia and Valencia have followed suit with partial or total bans of smoking on their beaches.