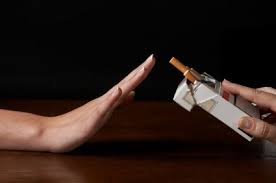 Your Health and Nature

Reuters Health) – – Ex-smokers may have fewer and less severe hot flashes during menopause than women who continue to smoke, a small study suggests.

Women who hadn’t smoked for at least five years were 45 percent less likely to have severe or frequent hot flashes than current smokers, researchers found. But they were still more likely to have symptoms than women who had never smoked.

“While the effect was strongest if women quit at least five years before the onset of menopause, even women quitting later did have a better outcome than women who continued to smoke,” lead author Rebecca Smith, a researcher in epidemiology at the University of Illinois, said by email. “I hope that this encourages women to quit smoking, the earlier the better.”

Smoking is the leading cause of avoidable deaths in the U.S., according to the Centers for Disease Control and Prevention. Smoking dramatically increases the risk of heart disease, stroke and lung cancer. It may also contribute to cancers almost anywhere in the body, according to the CDC.

Women go through menopause when they stop menstruating, typically between ages 45 and 55. As the ovaries curb production of the hormones estrogen and progesterone, women can experience symptoms such as vaginal dryness, mood swings, insomnia, and hot flashes and night sweats.

Because previous research has consistently linked smoking to worse hot flashes, Smith and colleagues wanted to see if this connection also held true for women who had quit.

As reported in the journal Maturitas, they studied 761 women ages 45 to 54, following them for up to seven years.

At the start of the study, 347 women were experiencing hot flashes.

Only 39 percent of never-smokers had hot flashes, compared with 52 percent of ex-smokers and 62 percent of current smokers.

About 47 percent of current smokers had moderate or severe hot flashes; this group was also most likely to have symptoms daily or weekly.

By contrast, moderate or severe hot flashes afflicted 36 percent of ex-smokers and 22 percent of never-smokers – and only about 10 percent of these women suffered hot flashes on a daily or weekly basis.

Compared to women who had never smoked, the current smokers were four times more likely to have hot flashes.

But, they note, their results are in line with past studies, and they speculate that smoking may interfere with hormones, neurotransmitters and other mechanisms that are also linked to hot flashes.

“It is never too late to quit, and quitting may reduce other health risks that are even more serious than the hot flashes,” Ellen Freeman, a researcher in obstetrics and gynecology at the University of Pennsylvania in Philadelphia, said by email. Quitting can also lower women’s risk for cardiovascular disease and cancers, she said.

“To my knowledge, this is the first study to show that stopping smoking in mid-life can reduce hot flashes,” added Freeman, who wasn’t involved in the study.

More in Your Health and Nature