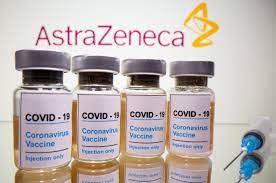 * Demand for AZ vaccines via COVAX similar to Chinese shots

BRUSSELS, April 14 (Reuters) – Poorer nations have refused tens of millions of AstraZeneca (AZN.L) COVID-19 vaccines from the global programme COVAX, a document shows, the latest sign that its short shelf life is sapping demand for the shot.COVAX is the world’s largest COVID-19 vaccine-sharing programme. It has so far distributed 1.4 billion jabs to 144 countries and is co-managed by the World Health Organization (WHO) and the vaccine alliance Gavi.As it rushes to boost vaccination in poorer nations, COVAX assigned over 200 million doses to 61 less developed countries, including most African states, for the six months through September.But, according to a COVAX document dated April 11 and published this week by the WHO, only a tiny portion were AstraZeneca.A spokesperson for Gavi, speaking on behalf of COVAX, said that several countries “indicated shelf life preferences that could not be met with available AstraZeneca supply,” and they were therefore allocated other vaccines.Countries declined to receive nearly 35 million AstraZeneca doses, opting to replace them with vaccines manufactured by Johnson & Johnson (JNJ.N), Pfizer (PFE.N) and Moderna (MRNA.O), the document says.For the six months, poorer nations asked for only around half a million doses of the AstraZeneca Covishield vaccine produced by the Serum Institute of India, which COVAX had initially regarded as its main supplier.In contrast, they requested around 16 million doses of the AstraZeneca Vaxzevria vaccine produced in Europe, which was similar to the amount of Chinese vaccine doses requested, according to the document.Requests for J&J and Pfizer shots were much higher, at 70 million and 40 million, respectively.SHORT SHELF LIFEAstraZeneca’s Vaxzevria has the shortest shelf life among top COVAX suppliers. That has reduced its appeal in less developed countries which face major logistical hurdles to administer shots and high vaccine hesitancy.Vaxzevria has a shelf life of six months, but often the vaccine leaves AstraZeneca plants with only a few weeks before expiry, due to quality checks and red tape read more .Gavi has said it has encouraged AstraZeneca for months to apply to the WHO for an extension of the expiration date.AstraZeneca declined to comment on the COVAX allocation of vaccines, but said it was working with regulators and the WHO to extend the shelf life of Vaxzevria.The WHO has already granted an extension of Covishield’s shelf life from six months to nine months.M AstraZeneca said it had supplied over 2.9 billion vaccines globally, mostly to low and lower middle-income countries.Gavi said that some countries declined more AstraZeneca vaccines as they had stocks of COVID-19 shots available.A second WHO document, also published this week, said that most poorer countries served by COVAX asked for insufficient doses to meet the WHO goal of vaccinating at least 70% of their population by the middle of the year.Syria and Sudan were the countries that opted to receive the highest number of AstraZeneca vaccines for the April-September period, respectively nearly 3 million and about 2 million doses.Nigeria, the most populous country in Africa, will receive no AstraZeneca doses from COVAX in coming months and has opted instead for about 4 million J&J vaccines, the document shows.