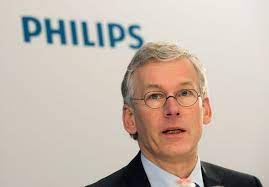 AMSTERDAM, June 28 (Reuters) – Independent tests on ventilators that Dutch health technology company Philips (PHG.AS) recalled last year because of possible health risks showed the problems were almost exclusively caused by unauthorised cleaning products, the company said on Tuesday.The Amsterdam-based company shocked investors last year by recalling 5.5 million ventilators used for the treatment of sleep apnea following concerns that foam used in the devices could deteriorate and become toxic.The “very encouraging” tests showed that the foam degradation was very rare and was linked to aggressive, unauthorised ozone-based cleaning products, Chief Executive Frans van Houten said.”Inspection of over 60,000 machines in the U.S. has shown foam degradation in less than 0.5% of the machines users said had not been cleaned with ozone,” Van Houten told Reuters in a telephone interview.”With the use of ozone products, this goes up to 7%, or 14 times higher. The correlation between the use of ozone and foam degradation that we assumed last year has been proven.”Philips will run additional tests to determine the potential toxicity of degraded foam parts, even though the tests so far have shown that the parts did not seem to leave the machine, the CEO added.”The recall is far from over but today’s release will provide comfort that potential health care risk for patients has been very low,” ING analysts wrote in a note.Philips shares, however, traded down 3.5% at 0815 GMT in Amsterdam, following strong gains in the previous days.The recall has knocked around 15 billion euros ($15.9 billion) off Philips’ market value over the last year, as investors fear a large claims bill from over a hundred class action suits that have been launched.The recall and repair operation, which is around half complete, is expected to cost around 900 million euros.