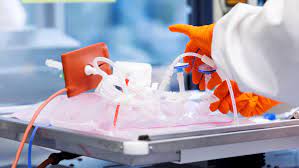 June 28 (Reuters) – The European Union’s drug regulator said on Tuesday it has started a review to extend the use of Bavarian Nordic’s (BAVA.CO) smallpox vaccine to prevent monkeypox disease as well.The Danish biotech’s Imvanex vaccine is approved for smallpox in Europe, but has been provided for off-label use to treat monkeypox cases.More than 3,400 confirmed monkeypox cases and one death were reported to the World Health Organization till last week, with a majority of them from Europe.Bavarian Nordic’s shot has already been cleared for both smallpox and monkeypox in the United States, where it is called Jynneos.The decision to start the EU review is based on results from laboratory studies suggesting that the vaccine triggers the production of antibodies that target the monkeypox virus, the European Medicines Agency said.The regulator also advised importing the vaccine from the United States to supplement tight supply in Europe as infection rates rise across the bloc.Earlier in June, the European Union signed an agreement with Bavarian Nordic for the supply of about 110,000 doses of its vaccines against monkeypox.