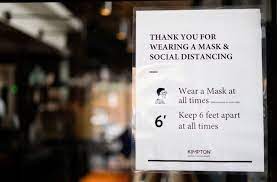 (Reuters) – Philadelphia will again require masks in indoor public settings such as restaurants, schools and businesses starting next week, the city said on Monday, responding to what appears to be a fresh wave of coronavirus transmissions.The new rule, which is set to take effect on April 18, will make Philadelphia the first major city in the United States to reimpose such a mandate.New infections in Philadelphia are rising quickly, up 50% from the start of April, prompting the city to step up prevention measures, city Health Commissioner Cheryl Bettigole said at a news briefing. COVID hospitalizations, a lagging metric, remain stable, she said.“This looks like we may be at the start of a new COVID wave, like Europe just saw,” Bettigole said.U.S. infection trends have tended to follow Europe by a few weeks throughout the pandemic.“At this level of transmission, we do not believe there’s any reason to panic or to avoid activities we enjoy,” she said. “Our city remains open.”The reversal comes more than a month after the city of 1.5 million residents relaxed its indoor mask mandate on public spaces amid a decline in cases in March following the record Omicron surge in January.Philadelphia is averaging more than 140 new daily cases, while fewer than 50 patients were hospitalized with the disease as of last count, Bettigole said.Cases in Pennsylvania rose nearly 70% in the span of a week as of Sunday, placing it among the top 10 states where infections are spreading fastest, according to a Reuters tally.New infections are up 10% in the United States as a whole over the past week, driven by the even more contagious BA.2 subvariant of Omicron. The Omicron cousin is now the dominant version of the virus in the United States and elsewhere.U.S. hospitalizations for the week were down about 6%, according to Reuters.Most U.S. states and localities have eased masking and vaccination requirements. Under new Centers of Disease Control and Prevention guidelines issued in late February, nearly all of the U.S. population currently live in counties where they do not need to wear masks indoors.More than 986,000 lives have been lost in the United States since the coronavirus pandemic began in early 2020, according to a Reuters tally.The recent uptick in cases has also disrupted schedules for several high-ranking public officials across the country.New York City Mayor Eric Adams tested positive for COVID-19 on Sunday, one of nearly 70 people who contracted the disease after attending the April 2, Gridiron Club dinner in Washington.U.S. Attorney General Merrick Garland and Democratic Representatives Adam Schiff and Joaquin Castor, who also attended the event, a highlight of the Washington social calendar, also tested positive.House of Representatives Speaker Nancy Pelosi on Monday said she tested negative for COVID-19 for the first time since her spokesman revealed on Thursday that she had been infected.