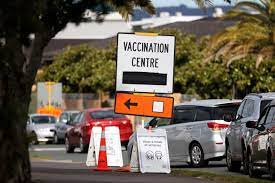 Oct 12 (Reuters) – New Zealand expects to administer a record 100,000 COVID-19 vaccine doses in a single day during a mass immunisation drive on Oct. 16, Prime Minister Jacinda Ardern said, as she seeks to accelerate inoculations before easing curbs in Auckland.

Ardern on Tuesday urged the country’s population over 12 years of age “to roll up sleeves for New Zealand and help make us (one of) the most vaccinated and therefore protected countries in the world”. Some 2.44 million, or 58% of the population over 12, have been fully vaccinated so far.

“There is nothing stopping us other than people (not) showing up,” Ardern said during a media briefing in Wellington.

New Zealand, which had stayed largely virus-free for most of the pandemic until a Delta outbreak in mid-August, has recorded 4,345 confirmed cases overall and 28 deaths.

It reported 43 new locally acquired cases of COVID-19 on Tuesday, with a bulk of those in its largest city of Auckland, up from 35 a day earlier.

Auckland’s 1.7 million residents entered lockdown in mid-August in an effort to quell the Delta outbreak. Some curbs were eased last week including leaving homes to connect with loved ones outdoors, with a limit of 10 people, as well as go to beaches and parks.