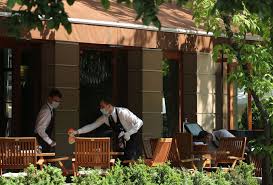 MOSCOW (Reuters) – Bars, clubs and restaurants in Moscow face two months of overnight closures to reduce the spread of COVID-19, Mayor Sergei Sobyanin said on Tuesday, as Russia’s daily tally of cases exceeded 20,000.Authorities have been adamant that severe lockdown restrictions, like those seen in the spring, will not be introduced, even as infections have soared to record daily highs and the official death toll from the virus has crept past 31,000.Russia is already testing two vaccines against the virus and is on the cusp of registering a third, President Vladimir Putin said on Tuesday, adding that all of the country’s vaccines were effective.Russia is rolling out its Sputnik V vaccine for domestic use despite the fact that late-stage trials have not yet finished, and on Monday said it was more than 90% effective, following earlier comments by vaccine developers Pfizer Inc and BioNTech, who said the same of their experimental COVID-19 vaccine.“Studies have already shown and confirmed that, firstly, these vaccines are safe and have no serious side-effects after use, and secondly, they are all effective,” said Putin via video conference at a Shanghai Cooperation Organization (SCO) summit meeting, the RIA news agency reported.Russia’s vaccine efficacy was based upon data collated from vaccinations of the public, rather than from an ongoing trial.Putin also said Moscow was ready to cooperate on coronavirus vaccines with other countries.Moscow Mayor Sobyanin said entertainment venues, including restaurants, bars and nightclubs would be forbidden from serving customers between 11 p.m. and 6 a.m. from Nov. 13 until Jan. 15, with a member of his office warning that raids would be conducted and fines imposed on those that fail to comply.Educational institutions, theatres and sports venues would also face heightened restrictions, he said.University and college students would switch to online learning, while it was recommended that other school children, already learning from home, keep travel around town to a minimum.“Additional restrictions are required in order to, as far as possible, break the chains of virus transmission and lower the level of infection,” Sobyanin said, writing on his personal website.Russia on Tuesday reported 20,977 new coronavirus infections and 368 deaths. At 1,817,109, its overall case tally is the fifth largest in the world, behind the United States, India, Brazil and France.#HealthForAll#HealthBroadcastingService#GlobalHealth#Covid-19#Health#HealthBroadcastingServiceInPublicHealthPartnership#Pharma