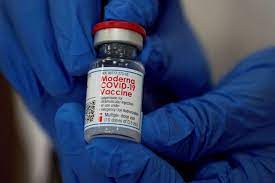 In a story first reported by the New York Times on Tuesday, Moderna excluded three NIH scientists as co-inventors of a central patent for the company’s multibillion-dollar COVID-19 vaccine in its application filed in July.

“I think Moderna has made a serious mistake here in not providing the kind of co-inventorship credit to people who played a major role in the development of the vaccine that they’re now making a fair amount of money off of,” Collins said in an interview ahead of the Reuters Total Health conference, which will run virtually from Nov. 15-18. [https://reutersevents.com/events/healthcare/]

Moderna expects 2021 sales of $15 billion to $18 billion from the COVID-19 vaccine – its first and only commercial product – and up to $22 billion next year.

In a statement emailed to Reuters, Moderna acknowledged that scientists at NIH’s National Institute of Allergy and Infectious Diseases (NIAID) played a “substantial role” in developing Moderna’s messenger RNA (mRNA) vaccine, but the company said it disagrees with the agency’s patent claims.

Collins said the NIH has been trying to resolve the patent conflict with Moderna amicably for some time and has failed.

“But we are not done. Clearly this is something that legal authorities are going to have to figure out,” he said.

NIH has asserted that three of its scientists – Dr. John Mascola, Dr. Barney Graham and Dr. Kizzmekia Corbett – helped design the genetic sequence used in Moderna’s vaccine and should be named on the patent application. Graham has since retired and Corbett is now working at Harvard.

“It’s not a good idea to file a patent when you leave out important inventors, and so this is going to get sorted as people look harder at this,” Collins told Reuters.

“I did not expect that to be the outcome from what had been a very friendly, collaborative effort between scientists at NIH and Moderna over many years.”

In its statement, Moderna said, “We do not agree that NIAID scientists co-invented claims to the mRNA-1273 sequence itself. Only Moderna’s scientists came up with the sequence for the mRNA used in our vaccine.”

Moderna said the company has acknowledged NIH scientists in other patent applications, such as those related to dosing. But for the core patent, Moderna is only required to list Moderna scientists as inventors of the sequence under the strict rules of U.S. patent law, it said.

“We are grateful for our collaboration with NIH scientists, value their contributions, and remain focused on working together to help patients,” the company added.