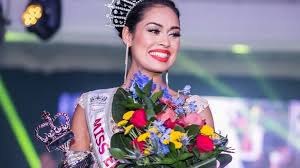 Miss England returning to her job as an NHS junior doctor

Bhasha Mukherjee is heading back to work at a hospital in Boston, Lincolnshire due to coronavirus.

The reigning Miss England says it was “natural” she should want to return to her job as a junior doctor during the coronavirus outbreak.
Respiratory specialist Bhasha Mukherjee has travelled back from India, where she’d been carrying out charity work, to return to the NHS.

The 24-year-old is due to start back at Boston Pilgrim Hospital, Lincolnshire next week.

“I could not be prouder to be both Miss England and to serve something of great national pride like the NHS,” Bhasha tells Radio 1 Newsbeat.

She was in India as part of a humanitarian trip across Asia and was due to travel to countries including Pakistan.

After seeing the unfolding crisis in the UK, she wanted to “share the load”.

“I felt unfair getting dressed up in a place of safety while my colleagues were laying their lives on the frontline,” she says.

The NHS is adapting to rising cases of Covid-19 in the UK through staff redeployment and asking recently retired doctors and nurses to come back to work.

On 27 March, the head of the NHS in England, Sir Simon Stevens, said: “We have reconfigured hospital services so that 33,000 hospital beds are available to treat further coronavirus patients.”

Currently, Bhasha is sorting out the logistical issues of her return to work, including things like what shifts she’ll be doing and where she’ll be living.

She’s currently self-isolating in her home city of Derby, which is around 80 miles from the hospital.

‘My concern is pressure on the NHS’
As a junior doctor, she’s aware the crisis means she’ll probably have to do extra training and be given a lot more responsibility than she would if the crisis wasn’t happening.

Bhasha also knows the health risks of returning to the wards but is not worried about contracting Covid-19 in the hospital.

“I could have caught it anytime or anywhere. I could have picked it up at any airport or while I was in India” she says.

“My main concern is the pressure our NHS is under.”

Bhasha was crowned Miss England in August 2019, shortly after gaining two medical degrees from the University of Nottingham.

She’d spent time training as a junior doctor on a respiratory ward, at the same time as modelling and taking part in pageants.

In October last year, she took a career break to compete in Miss World in London, before heading off on the foreign charity trip.

“Everyone has always wanted me to choose being part of the entertainment and pageant world or being a doctor. This means I can both with ease,” she says.

“What better way to represent Miss England than serving your country at a time like this.”
SOURCE: BBC News