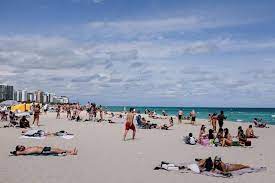 (Reuters) – The City of Miami Beach imposed an 8 p.m. curfew in its busiest entertainment district on Saturday in an effort to control hordes of spring break vacationers who have become unruly in recent days.

Under the new order, police will block off the Art Deco historic district in South Beach at 8 p.m. and all businesses within the blocked-off area will be forced to close, Interim City Manager Raul Aguila told reporters on Saturday. Officials will also shut down the highways leading in and out of the city overnight.

“This is not an easy decision to make, and we are doing that to protect the public’s health and safety,” Aguila said. “As we hit the peak of spring break, we are quite simply overwhelmed in the entertainment district.”

The crackdown comes as partiers from across the state and country have flocked to Miami Beach for its warm weather, famed party scene and loose COVID-19 restrictions compared to other states.

A restaurant brawl on the city’s Ocean Drive on Thursday prompted police to use pepper balls in order to break it up, NBC reported.

“I think the volume is clearly more than it’s been in previous years and that, I think, is in part due to the fact that there are very few places open elsewhere in the country,” Miami Beach Mayor Dan Gelber said.

The curfew measures are in effect for at least 72 hours. City officials were scheduled to hold a meeting on Sunday to decide whether to extend them.