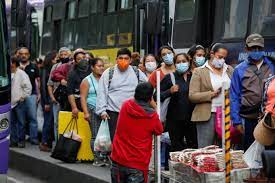 MEXICO CITY, Aug 19 (Reuters) – Mexico is battling a new wave of coronavirus infections as daily cases hit record highs and the official death toll passed 250,000, one of the highest worldwide.

Earlier this month, the United Kingdom placed Mexico on its red list of countries subject to the strictest travel curbs.

Jaime Gonzalez, a doctor who was buying an oxygen tank for a family member in Mexico City, said he was seeing hospital beds filling up again, and oxygen short in supply.

“It’s impossible for people to remain locked up, always,” Gonzalez said. “But we haven’t been able to strike a balance between what is necessary to stay healthy and live an economically viable life.”

Health officials have said the real number of cases is likely well above the official tally, and figures published earlier this year showed it could be at least 60% higher.

Still, the higher infection numbers probably in part reflect more widespread testing in Mexico, which for a long time carried out very few compared to many Western countries.

On Wednesday, Mexico chalked up more than 73,000 tests, around five times the number it was logging on weekdays the same the week last year, official government data show.