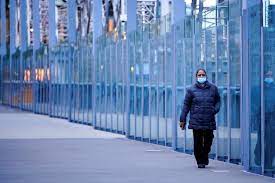 SYDNEY (Reuters) -Melbourne’s COVID-19 cases surged to record levels on Thursday with officials blaming illegal home gatherings to watch a key sporting event for the spike as a hard lockdown to combat the spread of the Delta variant neared two months.

Authorities in Victoria, home to Melbourne, estimated nearly a third of Thursday’s 1,438 new infections could be traced back to home parties last weekend to watch the Australian Rules Football Grand Final on television.

“Many of these cases were completely avoidable … I’m not trying to blame anyone, I’m simply trying to explain because a lot of people will be scratching their heads – how could it have gone up by so much, so fast,” state Premier Daniel Andrews said during a media briefing.

Officials admitted Thursday’s numbers, a 50% jump to Wednesday’s 950 cases, is a “major setback” in managing the flare-up, as they race to vaccinate the state’s 5.5 million adult population.

Half of the state’s population above 16 have received their first dose, below the national average of 53%, as officials halved the intervals between Pfizer shots in state-run vaccine hubs to three weeks after supplies rose.

Australia’s largest cities, Sydney and Melbourne, and the capital Canberra are in a weeks-long lockdown to combat a third wave of infections fuelled by the fast-moving Delta variant. Authorities have ditched a COVID-zero strategy and are looking at higher vaccination as their exit strategy from lockdowns.

A total of 941 new cases were reported in New South Wales on Thursday, the majority in state capital Sydney, while Queensland recorded six and the Australian Capital Territory 31 infections.

The record cases in Victoria come as the federal government on Thursday decided to phase out its emergency financial support for businesses impacted by the lockdowns, in line with its plan to end support to virus-impacted employees.

Federal Treasurer Josh Frydenberg said the temporary payments will stop once 80% of the adult population in states and territories becomes fully vaccinated.

But Victoria’s businesses will receive a fresh A$2.27 billion ($1.65 billion) support from the federal government through the next six weeks at which point the state should hit that dosage target, from around 50% now.

“We can’t eliminate the virus, we need to learn to live with it in a COVID-safe way”, Frydenberg said in a statement.

The federal government decision to wind down support payments, shared equally between states and Canberra, will put pressure on virus-free states to keep their economies open and avoid lockdowns to fight future outbreaks.

Prime Minister Scott Morrison has been pressing all states and territories to begin living with the virus once full inoculations reach 70%-80% but Queensland and Western Australia, largely COVID-free, flagged they may delay their reopening.

Despite the latest Delta outbreaks, total cases in Australia stand at around 105,000 and deaths at 1,291, well below other comparable nations. Eleven new deaths were recorded in the country.