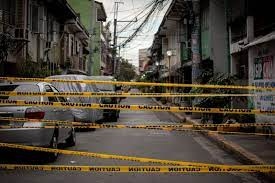 MANILA (Reuters) – The Philippine capital Manila will widen a ban on minors leaving their residences to include youths of up to 18 years old for two weeks starting on Wednesday, tightening coronavirus restrictions in a bid to tackle a new surge of infections.

Only those aged 18-65 years old will be allowed out of their homes, the Metro Manila Development Authority said in a statement, citing an agreement among mayors.

The Philippines late last year started easing one of the world’s longest and strictest lockdowns though a rule that anyone under 15 must stay indoors in Manila remained in place.

The Southeast Asian country has seen a surge in COVID-19 cases this month, recording the largest daily increase since mid-August on Monday with 5,404 new infections.

Nighttime curfews have been reimposed since Monday for two weeks in Metropolitan Manila, the country’s coronavirus hotspot that is home to more than 12 million people.

Additional measures such as liquor bans and localised lockdowns in areas with high infection rates have also been put in place.

The extended age limit comes five months after authorities allowed people from 15 to 65 years of age to go out as part of efforts to revive an economy that suffered the worst slump on record last year.

Nearly 2.4 million doses are expected by early April, comprising 979,200 doses of AstraZeneca’s vaccine through the COVAX facility and 1.4 million Sinovac shots including 400,000 donated by China, he said.

Galvez said there was no plan to halt the use of AstraZeneca’s vaccine to inoculate healthcare workers, even though several European countries have paused administering it after reports of possible serious side-effects.

The government has also signed an agreement with the Serum Institute of India for 30 million Novavax vaccine doses, due to arrive in the third or fourth quarter of the year, said Galvez.