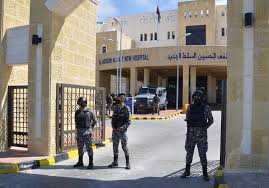 AMMAN (Reuters) – Jordan’s health minister was dismissed on Saturday after seven people died following an oxygen outage in a hospital treating coronavirus patients, and police were deployed to hold back hundreds of angry relatives, state media and witnesses said.

The oxygen failure on Saturday hit intensive care, maternity and coronavirus wards in the new Salt government hospital west of the capital Amman.

“This is a gross mistake that cannot be justified or accepted. I feel ashamed of it and won’t justify it,” Khaswaneh said, adding that he was awaiting the results of a judicial investigation.

Obeidat said he bore “moral responsibility” for the deaths of the patients, who were being treated for COVID-19 when wards ran out of oxygen for nearly an hour.

King Abdullah visited the hospital in a move officials said was intended to defuse tensions. Anger with the authorities has in the past triggered civil unrest in Jordan.

“How can a hospital like this see something like this happening?” he said on entering the multi-million-dollar hospital, which went into operation only last August.

Some politicians said the incident pointed to major mismanagement in government hospitals.

Jordan is facing a spike in COVID-19 infections attributed mainly to the fast transmission of the coronavirus variant first identified in Britain, and announced stricter measures to curb the spread of COVID-19 last week.

Jordan reported 8,300 new cases of COVID-19 on Thursday, the highest daily death toll since the pandemic first surfaced in the kingdom a year ago.