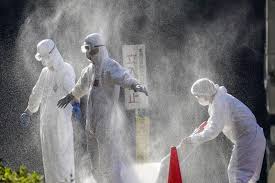 Japan’s bird flu outbreak worsened with two more prefectures reporting poultry deaths and exclusion orders in place on Thursday as the government ordered the disinfection of all poultry farms in the country.Highly pathogenic bird flu, most likely brought by migrating birds from the Asian/European continent, has spread to 8 of Japan’s 47 prefectures.While officials say that it is not possible to catch avian influenza from the eggs or meat of infected chickens, they are concerned about the virus making the “species jump” to humans and causing a pandemic like the coronavirus one raging now.The virus was confirmed at an egg-laying farm in Kinokawa city in Wakayama prefecture near Kyoto, Japan’s agriculture ministry said on its website.Three broiler farms in Oita prefecture on Kyushu island also reported outbreaks, the ministry said.Japan’s worst outbreak since at least 2016 started last month in Kagawa prefecture on Shikoku island, which is close to Kyushu.The government on Wednesday called for the disinfection of poultry farms across Japan to contain the outbreak, national broadcaster NHK said.“The need for vigilance is stronger than in usual years,” chief government spokesman Katsunobu Kato was quoted by NHK as saying after meeting with other government officials.More than 130,000 chickens at the farms in Oita and Wakayama will be slaughtered and buried, while exports in a 3km (1.8 mile) radius around the farm will be restricted.The latest cullings mean more than 2 million chickens will have been slaughtered since the latest outbreak began. Japan had a broiler chicken population amounting to 138 million head last year, according to the U.S. Department of Agriculture.#manchesterunited#HealthForAll#HealthBroadcastingService#GlobalHealth#Covid-19#coronavirus#Health#paulpogba#ukcoronavirus#HealthBroadcastingServiceInPublicHealthPartnership#rochellewalensky#rashidajones#chargers#sevillavsrealmadrid#spotify2020#dangable#extraterrestriallife#vaccine#davidllander#paolorossi#asdastoresltd#greysanatomy#chelseavsleedsunited#buffalobills#euromillions#softbank#ncis#geesixfive#juventusfc#goldiehawnhttps://uk.reuters.com/…/health-birdflu-japan…(Graphic: Japan’s birdflu outbreak by prefecture: )