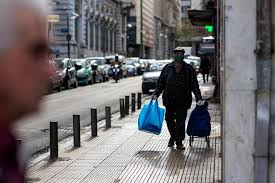 Some Greek retail stores must close earlier from Saturday until Oct. 4, authorities said, further tightening restrictions amid a surge in coronavirus cases in the greater Athens area and other parts of the country. In a state address on Thursday, Prime Minister Kyriakos Mitsotakis cautioned Greeks to stick to mask-wearing and social-distancing to help avert a second lockdown which would have a “dramatic impact” on the economy. On Friday, Deputy Civil Protection Minister Nikos Hardalias said that kiosks, mini markets and wine stores will close from midnight until 5 a.m. in Athens and other areas with a high caseload, including the islands of Lesbos and Mykonos. Drug stores and gas stations will be exempt from the new measure. Greece last week imposed an upper limit of nine people in all public gatherings outdoors and suspended indoor and outdoor concerts in Athens. Health authorities reported 286 cases of COVID-19 on Friday, more than half of them in the Athens metropolitan area, Attica, where about one third of the country’s population lives. The new infections brought the total number of cases to 16,913 since late February. There were three new fatalities, with total deaths reaching 369.