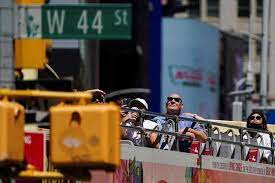 WASHINGTON/LUBBOCK, Texas (Reuters) -New federal guidance allowing people to go without masks in most places provided one more moment of disagreement between Americans who have found little common ground throughout the pandemic.

Some cited caution and confusion, while others who have rarely worn masks rolled their eyes at the advice from the U.S. Centers for Disease Control and Prevention (CDC) on Thursday that fully vaccinated people do not need to wear masks outdoors and can mostly avoid wearing them indoors.

The CDC says the updated guidance would allow life to begin to return to normal amid hopes it will prod more people to get vaccinated against an illness that has killed more than half a million Americans.

“I’m nervous about it,” said a masked Allison Douma, 24, out walking her dogs in Washington, D.C. She was fully vaccinated last month. “I just don’t feel safe because vaccination rates are going down, and I’m worried about the mutations.”

Over 1,600 miles away in Lubbock, Texas – where Republican Governor Greg Abbott lifted a statewide mask mandate in March – the CDC guidelines were largely met with a shrug.

“I don’t think masks worked as well in stopping the virus as the media would have you believe – people did not even wear them properly in the first place,” said Riker Beauchamp, 20, a pizzeria worker in Lubbock.

Beauchamp, yet to be vaccinated, said he wore a mask if a business asked but did not in businesses where owners did not care. He accused liberals of fear mongering over the need to wear masks.

In many parts of the United States, people have not been wearing masks for months. A January survey by the University of Southern California Dornsife Center for Economic and Social Research found that even at a peak time for COVID-19 infections, half of Americans were not wearing masks when mixing with the public.

Explainer: What is the science behind the new U.S. mask guidance?

In New York City, Maggie Cantrick, 39, who works at an arts center, said she was not ready to lose her mask in places such as a grocery store. “I am fully vaccinated – I can just take off my mask? This is crazy!” she said.

U.S. supermarket chain Kroger Co said it will continue to require customers to wear masks. “We are reviewing current safety practices, the CDC’s latest guidance, and soliciting feedback from associates to guide the next phase of our policy,” the company said in a statement.

Another food chain, Trader Joe’s, said it would immediately drop its mask mandate for customers who are fully vaccinated.

The administration of President Joe Biden has faced criticism for mixed mask messaging, with the president keeping his mask on in most instances, indoors and outdoors. On Thursday he appeared in the Rose Garden without his mask.

On Friday, Biden made a surprise appearance outside the White House for a tour with visitors not far from where the media is stationed near the West Wing. “Yes,” he told reporters when asked if he was enjoying working his first day without a mask.

With the new federal guidance, it will be up to people to decide how to protect themselves now that vaccines are readily available, top U.S. health officials said on Friday.

She said officials were still encouraging unvaccinated people to get their shots to protect themselves and others against the novel coronavirus that is still circulating even as cases decline.

In an MSNBC interview, Dr. Anthony Fauci, the nation’s top infectious disease official, echoed the idea that looser recommendations should encourage people to get their COVID-19 shots so they can shed their masks.

There are caveats. The looser mask guidance does not apply to certain situations such as public transportation and prisons. There is also no approved U.S. COVID-19 vaccine for children aged 11 and younger.

Dr. Walid Gellad, a professor at University of Pittsburgh’s medical school, said he believed the CDC guidance was two or three weeks too early.

“The problem is that there’s no mechanism to identify who’s vaccinated. So, someone’s going to be in a store. No one’s going to be wearing masks, and some of those people will be unvaccinated – that’s just the reality,” Gellad said.

Ahmad Erfani, 70, who runs Le Caprice bakery in Washington, said he would still ask indoor customers to keep their masks on. “You don’t know who is or isn’t vaccinated,” he said.