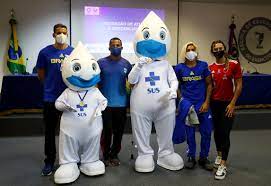 Doctors in six Brazilian cities vaccinated the first groups of 1,800 people, Olympians and Paralympians among them.

“I feel like it gives me security,” one of these getting the Pfizer vaccine, archer Marcus Vinícius D’Almeida, said.

“I was blocked from participating in some countries so now I feel that I can complete my pre-Olympic routine during these last three months without the worry that I will get sick.”

Brazil has been hit hard by the COVID-19 pandemic with more than 428,000 fatalities so far, a number higher than any country bar the United States.

Many nations have halted flights from Brazil due to the high number of positive cases there. More than 1,000 people are still dying of the virus in South America’s most populous nation.

Explainer: What is the science behind the new U.S. mask guidance?
Go maskless? Some Americans skeptical of new guidelines, other say it’s high time