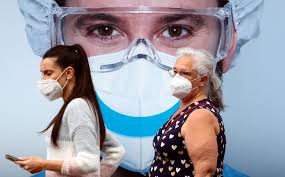 Europe surpassed 100,000 daily reported COVID-19 cases for the first time on Thursday, after countries such as Russia and United Kingdom saw no respite in the mounting number of infections every day in the past five days.

Cases throughout Europe have been steadily rising over the past week even as new infections in worst-affected countries such as India and Brazil have shown signs of slowing down.

The epicentre of the outbreak in the European region has moved to the United Kingdom, Russia, Spain and France which have reported at least over 10,000 cases each in the last three days.

The United Kingdom recorded more than 17,000 cases on Thursday with the country’s Health Minister Matt Hancock warning that the United Kingdom was at a “perilous moment”. Many parts of northern England, Wales and Scotland have introduced tougher restrictions on social interaction to try to curb the growing spread of the disease.

Britain has been reeling under a double whammy of coronavirus cases skyrocketing and an alarming case-to-fatality rate of 7%, among the highest in the world. More than six of every 10,000 people have died due to the virus in the country.

WHO expert says ‘sad’ to see COVID-19 cases rising in Europe
Europe currently has recorded over 16% of total global coronavirus cases and nearly 22% of deaths worldwide due to the virus. On Thursday, when daily reported cases breached the 100,000 mark, Eastern Europe was the worst affected region with over 33,600 daily reported cases.

Among the 10 countries in the region, including Ukraine, Russia and the Czech Republic, eight posted record increases in cases in the past week. GRAPHIC: New COVID-19 cases in Russia, Ukraine, Czech Republic and Poland over 3 weeks

In Northern Europe, Britain was the sole country with a mammoth caseload. New infections in the country have risen more than 2.5 times since the beginning of October showing no signs of slowing down.

Italy, in the southern region of Europe, recorded over 4,000 cases for the first time since April when the country was slammed by virus. The daily number of cases in the country has been consistently rising for three months.

The country has the second-highest death toll in the continent, with 36,083 dying since the outbreak erupted in February.

Spain’s government invoked a state of emergency on Friday to impose a partial lockdown on Madrid. With 850 COVID-19 infections per 100,000 people, the Madrid area has Europe’s highest infection rate.

In Western Europe, France recorded new daily COVID-19 infections above the record 18,000 threshold for two days in a row on Thursday, with hospitals moving to an emergency mode and its biggest cities closing down establishments to curtail further spread of the virus.

Belgium too enforced stricter controls on gatherings after new infections surged in the country. New coronavirus cases rose more than 2.6 times since the beginning of October. COVID-19 has already claimed over 10,000 lives in the country, which has a population of 11 million people.

In Europe, daily cases averaged around 78,000 cases for since the beginning of October, compared with an average of 47,500 cases in September.