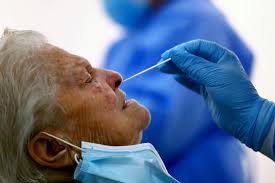 European countries are looking at buying millions of COVID-19 rapid tests mostly from Roche and Abbott, an EU document shows, as global production of the tests is stretched by a surge in infections.

Antigen tests are a quicker alternative to the more common molecular PCR (polymerase chain reaction) testing kits. Although less accurate, they can give results in minutes instead of the days sometimes needed for PCR tests – a difference that could help better trace cases and contain the pandemic.

About ten European nations are looking at antigen tests from either U.S firm Abbott or Swiss rival Roche and its partner SD Biosensor, the document shows, without naming the countries.

Both antigen and PCR tests need a nasal swab, but while PCR tests detect genetic material in the virus, antigen tests look for proteins on the virus’s surface.

Countries around the world are jostling to secure supplies to help tackle the COVID-19 pandemic, from tests and treatments to potential vaccines. Earlier this month, the EU agreed to pay more than 1 billion euros ($1.2 billion) for supplies of antiviral drug remdesivir, shortly before trial results that questioned its effectiveness in treating COVID-19.

“The rapid antigen tests produced by Abbott and SD Biosensor/Roche are the most considered options,” said the document, published this week on a little watched European Commission webpage.

It contained a debrief of a meeting of European health experts last week in which governments exchanged information on rapid tests ahead of new proposals on the matter from the Commission and a video conference of EU leaders due on Thursday.

Additional kits would be bought through a joint procurement scheme led by the Commission, von der Leyen said, although it is not clear whether EU governments will opt to buy together or on their own.

Half a dozen of the 27 EU states already use antigen tests.

Germany has said it has secured nine million testing kits a month from Abbott, Roche and Siemens Healthineers, while the regional state of Bavaria has ordered another 10 million. Italy announced last week it was seeking to deploy 10 million tests in coming days.

SHORT SUPPLY?
The European rush to rapid tests comes as global demand has spiked in recent months amid a surge in infections.

The U.S. government said in August it had bought 150 million antigen tests from Abbott for use through December.

Abbott said in October it had a monthly production capacity of 50 million antigen tests. It was not immediately available for a comment for this story.

Roche says it can manufacture up to 40 million rapid testing kits each month and aims to double its capacity by the end of the year “to meet the growing demands of healthcare systems”.

Among other large players, production from the likes of Siemens Healthineers and Becton Dickinson could add millions of tests a month to global capacity, but demand may temporarily exceed supply, Healthineers has warned.

At the pandemic’s outset, many countries experienced shortages of PCR tests amid sky-rocketing orders, and Roche has said demand is still far outstripping supply.

Antigen tests will be one of the main topics EU leaders will discuss at a video conference on Thursday, EU officials told Reuters.

That will follow proposals on Wednesday by the Commission to improve the bloc’s testing strategy and coordinate national rules on quarantines and contact tracing, officials said.

Antigen tests are manufactured by dozens of other companies, too, but most have lower or insufficiently tested accuracy compared with the main players.

In clinical studies, Abbott’s test has shown a sensitivity, or ability to correctly spot positive cases, above 97%. It also has more than 98% specificity, which helps to correctly identify people who are not infected, preventing travellers from undergoing unnecessary quarantines.

Roche’s test has a slightly lower sensitivity, but higher specificity.