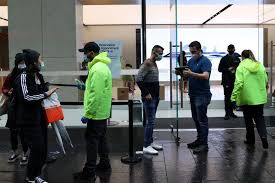 The Australian state of Victoria, the epicentre of COVID-19 infections, said on Tuesday it had gone 48 hours without detecting any new cases for the first time in more than seven months.

Victoria, the second most populous state, will allow restaurants and cafes in Melbourne to reopen from Wednesday after more than three months under a stringent lockdown.

Despite case numbers dwindling and businesses poised to reopen, Victoria will only ease limits on social gatherings in the home, allowing two adults and dependents from one house to make one daily visit to one other household.

Victoria Premier Daniel Andrews said the highest risk of spreading the virus remained in the family home where social distancing protocols were often not applied.

“This is just about making sure that people can connect, but we can’t have a situation where people are having visitors in the morning, visitors at lunchtime, visitors in the evening,” Andrews told reporters in Melbourne.

“What we, all of us as Victorians, have built is a precious thing, but it is fragile.”

The pace that Victoria has reopened has frustrated many, including Prime Minister Scott Morrison who has argued Australia’s most populous state has eased restrictions despite small, single figure outbreaks, often bigger than in Victoria.

Australia’s COVID-19 restrictions have pushed its economy into its first recession in three decades, triggered after large swathes of the economy were shut to slow the spread of the virus.

The economy shrank 7% in the three months to the end of June, the biggest quarterly contraction since records began in 1959. Unemployment hit a 22-year high of 7.5% in July as businesses and borders closed.

Australia has recorded just over 27,500 novel coronavirus infections, far fewer than many other developed countries.

Victoria, which accounts for more than 90% of the 905 deaths nationally, did not record any new deaths from the virus in the past 24 hours.