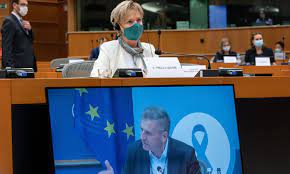 BRUSSELS, June 29 (Reuters) – The European Commission proposed on Wednesday to ban the sale in the EU of flavoured heated tobacco products after a big rise in their consumption.”By removing flavoured heated tobacco from the market we are taking yet another step towards realising our vision under Europe’s Beating Cancer Plan to create a “Tobacco Free Generation” with less than 5% of the population using tobacco by 2040,” EU health commissioner Stella Kyriakides said in a statement.The proposed ban would be in force if EU governments and EU lawmakers do not oppose it. Even if approved EU-wide, governments will have months to adapt their legislation to the possible change before it is effective on their territories.The move comes after the Commission estimated a 10% rise in the sales volumes of heated tobacco products in half a dozen EU countries, helping heated tobacco products to exceed 2.5% of total sales of tobacco products in the EU, the EU executive said.Heated tobacco is an alternative to smoking which uses real tobacco. That is different from e-cigarettes which contain no tobacco and use liquids.Philip Morris International (PM.N) has the biggest share of the heated tobacco market, according to the University of Bath.