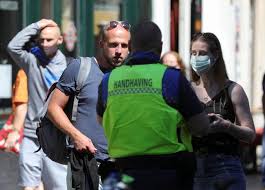 The Netherlands’ Prime Minister on Thursday called on tourists to avoid busy parts of Amsterdam, following a sharp acceleration in the number of coronavirus cases in the Netherlands. Prime Minister Mark Rutte cut short his summer vacation after the National Institute for Health (RIVM) reported 601 new cases on Thursday, from 426 a day earlier, following weeks of gradual increases. “Very specifically for the city of Amsterdam, I say to tourists foreign and domestic, and partly on behalf of the mayor: avoid the busy parts of the city,” Rutte told reporters in The Hague. Amsterdam’s mayor Femke Halsema on Wednesday began mandating masks in areas including the central Red Light prostitution district, which is a magnet for foreign tourists. That stands in contrast to national policy, as Rutte’s government has said it will not advise the public to wear masks, other than on public transport. The government has said that masks are not proven to be effective, may be used incorrectly and may weaken adherence to distancing rules. Amsterdam, together with Rotterdam, began mandating the masks anyway, billing the move as an “experiment.” The World Health Organization since June has advised wearing masks in shops and busy outside areas when it is impossible to maintain physical distance. Rutte said that the country’s outbreak was worsening and that it would be “stupid” to pretend otherwise. New cases are mostly among people aged 20-40, based on RIVM data. “The virus is making a dangerous advance and we’re at risk of losing the gains we’ve made together in the past month,” he said. “We don’t want a second lockdown and we don’t have to have one, but that won’t happen by itself,” he said. He said that rules on restaurants would be modestly tightened nationwide. In addition, regional outbreaks may lead to beaches being closed or earlier closing time for bars.