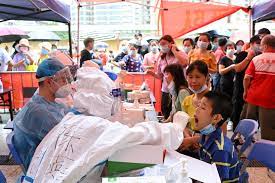 China reported 124 new confirmed coronavirus cases in the mainland for Aug. 5, according to the National Health Commission.

Of the new confirmed infections, 80 were locally transmitted, the health authority said, up from 62 local cases a day earlier.

The local cases were driven by a surge in infections in eastern Jiangsu province, which reported 61 new cases for Aug. 5, up from 40 a day earlier.

The new infections were mainly in the city of Yangzhou.

Overall, China reported 58 new asymptomatic coronavirus cases, which it does not classify as confirmed infections, compared with 54 a day earlier.

No new deaths were reported.

The cumulative death toll is unchanged at 4,636.