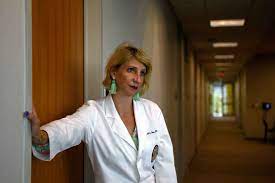 NEW ORLEANS Aug 5 (Reuters) – Doctors in Louisiana have been through it before: the exhaustion, the grief, and the overflowing intensive care units.

But this new surge of COVID-19 cases driven by the Delta variant is different, not least because it did not have to be.
“Where we are now was preventable, and that’s what is so hard for my colleagues in hospitals to stomach,” said Rebekah Gee, who until last year was the health secretary for Louisiana and now heads Louisiana State University’s healthcare services division.

”The national vaccination campaign that began in the past year offered a new weapon against the novel coronavirus besides masks and social distancing.

Health experts say shots can prevent illness or keep people from becoming gravely ill, and the more people who are vaccinated the less likely the virus will mutate into something worse as it spreads.

But Louisianans have been more hesitant to get the jab: The state’s vaccination rate ranked it 47th among U.S. states for first doses given, according to a Reuters analysis of state and county data, and that’s had a major effect on its public health system.

On Thursday, Louisiana reached a record number of COVID-19 hospitalizations, arriving at 2,350.

“Look to Louisiana as a cautionary tale of what happens when you have low vaccination rates in a state,” Gee said.

“And what happens is that the virus continues to mutate, it finds available hosts, and it spreads like wildfire. And the only way to stop it is the vaccine.

”Doctors say the low vaccination rate is due to a mix of historical poor health rankings, misinformation campaigns by influential people, including the state’s attorney general, and the same ideological divide over vaccines that other deeply conservative states witness.

While the severity of the situation is leading to a rush on vaccination centers in Louisiana, Gee is still apprehensive.

“What I worry about is what will happen with the next variant – and the variant after that,” Gee said. “The virus could get more deadly.

”“The only way out of this is for herd immunity, which is 75% of people vaccinated,” Gee said.

However, according to the most recent data, only 43% of Louisianans had received their first dose and just 37.1% were fully vaccinated.

The respective figures for all the United States were 57.9% and 49.7%.“EVERYBODY IS AT CAPACITY”One of the alarming aspects of the latest Delta variant surge is its impact on children and teens, who were believed to be at low risk earlier in the pandemic.

COVID-19 patients filled every bed in the ICU at the Children’s Hospital in New Orleans was full this week.

Doctors and public health leaders said they are increasingly seeing seriously ill patients who are younger and who had no underlying health condition to make them more susceptible.

Two-thirds of hospitalized children are too young to qualify for any vaccine.Across Ochsner Health, the largest non-profit healthcare provider in Louisiana, the positivity rates for people 19 and under hit nearly 24% this week.

Dr. Katherine Baumgarten, Ochsner’s medical director for infection control and prevention, said Louisiana is only seeing the beginning of the Delta variant.

“We anticipate we’ll need more ICU beds over the coming weeks,” she said.Some Louisiana doctors sound like soldiers still fighting a war on which people far from the front lines have soured.

They no longer feel the support the public once lavished on them and say they face a worsening situation without the support they saw earlier in the pandemic.

“The ‘healthcare hero’ signs might still sit in some doctor’s front yards, but the public kind of stopped buying in,” said Thomas Krajewski, an emergency room physician who works at several hospitals in the New Orleans metropolitan area.Krajewski’s wife, Genevieve, is also an ER doctor.

The Krajewskis in normal times say they may see 50 patients in a shift. It was up to 90 patients this week.

Everybody is at capacity.

Things are just hanging in there,” Krajewski said.

“If anything horrific comes in the door, it feels like it could all fall to pieces, and we’re just living on an edge like that. You go in and you’re just waiting for the whole thing to fall apart.”