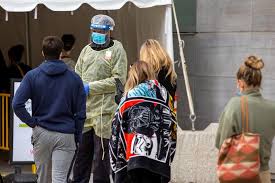 Canada said on Tuesday that it had signed a deal with Abbott ABT.N to purchase up to 20.5 million Panbio COVID-19 antigen tests as Health Canada approved the device, the first of its kind in Canada. The disposable swab test may help ease pressure on testing sites and labs in Ontario and Quebec, where cases are surging and some patients must wait a week or longer for results. It works in 15 minutes, and is similar to Abbot’s BinaxNOW, already on the market in the United States. “These antigens tests will have a role to play in avoiding large cluster outbreaks, when results are needed quickly to avoid further spread of the virus,” said Patty Hajdu, Canada’s Health Minister, in the statement. Federal officials said last week that they expected an antigen test to be approved soon. [L1N2GQ14F]Canada was slow to approve the tests, already widely used in some other countries. Officials have said they are moving as quickly as they can without compromising safety. [L2N2GJ161]